Truth be told, there hasn't been much to say of any great revelation over here but rather than leave it to grow weeds I'll bother a few keytops and see where I end up.

It seems I omitted something from my last post which should be rectified. I'm sure I tweeted it and plonked it on a message board but I feel the need to include Adam's (he's wearing a hat, you know) little video heralding his visit to Jersey.


There's a clip here that won't embed but dear Louis Theroux give a fond mention of his schoolboy buddies in this five minute film.

Remember when Adam had an incident with a fitted sheet and a shopping mall? Knock2Bag have included some audio from his March gig in their Podcast #9 which Adam also introduces.

I'm going to get this out of the way and then forget about it. Such is the desperate nature of the media, several sources are happy to report that Nick Clegg went to the same school as Adam and Joe, albeit a couple of years in advance of them. This has spawned a dribble of inane tweets that I feel like baking in a pie with some blackbirds but that's my fault for having too many columns in my Tweetdeck.

When Louis was on The One Show he gave some detail of a trip he and his brother took to the States with Nick and to all intents and purposes, it sounded as though he fagged for Nick, during his first term. Beyond that, any other nonsense is pure conjecture.

Adam's Sunday show is going from strength to strength. It's heavily trailed and the podcast remains at a healthy position in the charts. Just in case you didn't notice the addition to my last post, here's a Spotify link to Adam's "What I'm Listening To" tracks he did for the Observer the other weekend and another thank you to Kevin E G Perry because I saw from the hard copy that he had supplied me with something far more extensive than the tiny bit that got into print.

Nick Frost tweeted to the effect that he was having a good time working with Joe but another tweet implied that the silicon filled death bomb hovering over the country put paid to some on-set media visits.

The crowning glory of this post must surely go to the wonderful Chris Salt's film for Adam's version of "Changes". We are all familiar with his awesome talent but there is so much incredible detail in this, it really needs multiple viewings. Chris was also name-checked in Adam's show with Garth last Sunday.

Please play it and pass it on. Heck, it's so awesome, it's the front feature of Love6Music's satellite site.
You have done all that business to save 6Music, haven't you?

You can scuttle along to the next protest which happens just before the 'consultation' closes. The demo is on 22nd May and more details will come through this portal.

Lovely Lauren Laverne invited requests for her MirthMix section which resulted in Doctor Sexy steaming out of many a DAB on Wednesday lunchtime. You can catch the clip here.

Can't decide on your next cross-stitch project?
Look no further than this handy link. 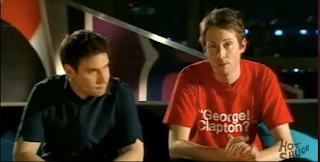 
"Adam And Joe Go Tokyo" wherein Joe sports that t-shirt with the most bemusingly delicious slogan in the history of daft t-shirts.

Leon Trigg - the originator of the Schwarzenegger fanzine featured in Adam and Joe's Juvenilia section, had a film showing in the London Independent Film Festival earlier this week. Look out for other screenings.

If you're in London & you like your cinema-going to be truly experiential, nip along to UltraCulture's screening of The Bad Lieutenant: Port of Call – New Orleans on 5th May 2010. If you're not familiar with central London, please understand that Charlie's map for the ICA is ......loose.

Absurd though it may seem, Jarvis Cocker is nominated for a 'Rising Star Award' at the Sony's. There is still time to vote for him.

Funny Or Die UK have launched their YouTube Channel wherein young James looks far too sweet and beardy to be such a naughty man.

Speaking of beards and Funny Or Die, they hosted another incredible session with BeardyMan himself, beatboxing requests on a live stream the other night. I lost an entire hour of my silly life to it.

One final note of apology. I don't seem to get email alerts on the rare occasions when comments are made on this blog. I feel that I've checked all the right boxes but I still don't get them. Sorry, I did not mean to ignore anyone.

It's ludicrous how much I can waffle when there's nothing to say, isn't it?
Posted by Auntie_Nubbins at 20:45