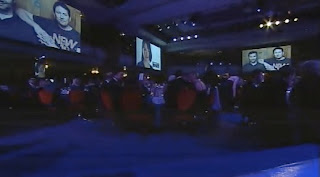 I suppose the biggest news since my last post is the Sony Radio Academy Gold win for
BBC 6Music's Adam and Joe Show.

Joe was too busy shooting and cutting but Adam and James Stirling were there. You can watch a webcast of the entire event here. I gave the presentation and Adam's speech to YouTube for safe-keeping. 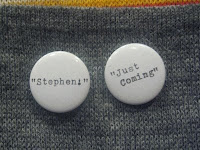 You'll see that he thanked Video Wars genius Chris Salt and the original Stephen! Chris Evans and the rest of the room seemed to give such a warm response to the award. It's a shame Joe wasn't there to soak up the glory but he's probably relieved that he didn't have to make a speech. Adam did a wonderful job.

The entire presentation evening kicked off with an award for Best Newcomer which was given to 6Music's own Jarvis Cocker. You can listen to his speech. Sony have various interviews here including one with Jarvis but nothing with Adam though Metro has some lovely pictures.

The other news is that Adam's been prepping a pilot for a sit-com that's been bubbling around for a few months.

SAME TIME NEXT WEEK
Welcome to Toxborough Village Hall…home to a brand new comedy chat show for the BBC.
Hosted by the irrepressible housewife Celia Jesson (played by Joanna Neary) together with her ridiculously sensible husband Fred (Al Kerr) and dashing local actor Gerard Jeremy (played by Adam Buxton), these delightfully eccentric characters will be taking a hilarious look at life in and around their fictional village with video diaries, reviews, letters and songs and will also be joined by two mystery celebrity guests. It promises to be an event not to be missed!

Feel free to dress up in your finest provincial clothing for a night out at your local village hall!

The show will be recorded on Wednesday 19th May 2010 in London. If you'd like to join us at BBC TV Centre, then apply now.

Adam updated his own blog with a polite, sincere and amusing request to Mr Bowie.

The Big Mixtape show has been getting some really lovely vibes around the place. I thought I'd randomly link this one today. There was a fantastic response to Adam's request for questions to levy at Jon Ronson. I really loved this episode but don't make me choose!

In common with several 6Music DJs, they have started a Twitter account which I urge you to follow. Adam and James sent out a tweet to Victoria Coren, inviting her to guest on his show.

Adam has had three gigs - 100 Club, Are You Taking the Peace and the BUG Unkle launch special. While I remember, BUG have got a little shop with some t-shirts that might take your fancy. They have them in all the colours and sizes.

Adam will take BUG back to Amsterdam on 25th May. He's going to forget what the wife looks like at this rate, unless he takes her on a romantic trip.

BUG is also going to Norfolk for a special gig on 16th June.

Attack the Block had a load of set visits from bloggers and journos after the Bank Holiday. These were meant to have happened a couple of weeks earlier but a catASHtrophy put the right people in the wrong places. I'll have my work cut out syphoning up the media bobbles when we get closer to the release date. If they're still shooting, I would think there can be no more than two weeks worth of principal photography left now. Nick Frost wrapped on Wednesday and this lovely lady was working that day too.

Studio Canal/Optimum will have been hard at work in Cannes and I'm trying not to think about whether they've taken a short promo package with them. HA - and even as I blogdraft, Film4 tweet this:-

It's quite unusual for Film London to post much about a film while it is still in production on the streets but they have this piece now.

Jodie Whittaker is going to be doing various press pieces for Royal Wedding and if this is anything to go by, Attack the Block will get a few name-checks.

In the same 80's strand as Royal Wedding, Nick Frost's Martin Amis drama, Money airs part one on 23rd May. I saw this ages ago and I'm really looking forward to seeing part two finally which I believe is aired the following week....or a couple of days later. I saw Royal Wedding a while back too and I hadn't realised it was only just coming on air. I've wittered about my unintentional Whittaker Watching before, haven't I? When she was cast in Attack The Block, I just thought "of course".

The Rajar figures had everyone at 6Music in a cock-a-hoop state this week.

If you haven't grabbed them before, the LiveJournal has links to freshly edited versions of the Coke Podcasts.

Since he was Adam's guest this week, I'm including a link to an interview with Hot Chip and Peter Serafinowicz.

The Love BBC 6 Music site has an amusing new video and don't forget to click for demonstration details.

Lauren Laverne did a wonderful show from Glastobury last week and announced the 6Music schedule. Sadly, Adam and Joe don't figure in it but I'll not give up hope until July. There's a lovely bit in The Times about Lauren Laverne.

Mr John Landis directed the most influential pop video of all time and that is now an indisputable fact.

Richard Herring is prepping for series two of As It Occurs To Me.

If you feel like singing a song of joy about the Sony Gold win, you could do a lot worse than this.


Finally - and added after the fact, I was not paying enough attention last week. I completely missed this priceless nonsense from Robin Cooper.