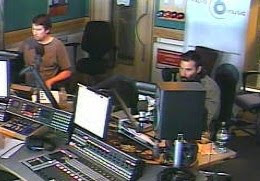 Weeeeeeelll, they seem to have failed to come up with a Black Squadron command this week but they've dressed it up as if to imply it was a planned outage.

We now have Boggins!

.....ETA - just a bit of trivia....from a 'Boggins' twitter search, a few days before the rebranding of the Adam and Joe show was announced, this popped up.

Tweeted by UKcelebs(Twit Parade)
@howardread My kids use the word Boggins. It was created by my mum when she wanted to say Bug... and realised there were kids in the room.

After the Boys of Summer have gone.... 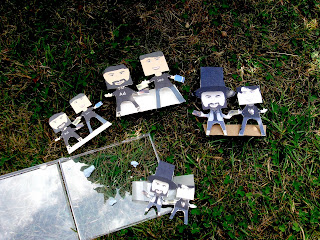 Adam and Joe's radio hiatus is coming to an end.

This silly little blog did not quite turn out to be what I had hoped for. Family illness & now subsequent bereavement made me stay closer to home than originally intended. I've been happy to know that my little cardboard buddies were at my side through the months of mellow fruitfulness.

There is still time to submit suggestions for Text the Nation subjects at the blog. Some eager people are shooting their loads prematurely and submitting answers to other peoples' suggestions but I guess that will help give an indication of what subjects might be more fun than others to pursue.

So, just a few more days until we hear (and maybe even glimpse) Adam and Joe but which one is the best? Don't Make Me Choose.
Posted by Auntie_Nubbins at 10:13 No comments: 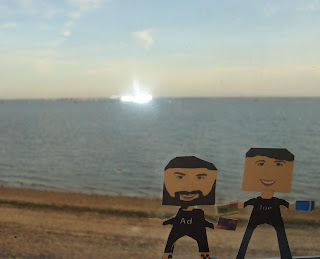 I have no idea what the timeline might be for this podcast (even the link is time-sensitive) but for the sake of continuing this fictitious adventure *smirk* , let's just say that our favourite comedy duo (please vote) have finally left their homes & places of day-work to embark on a proper holiday.

It seemed only fitting that on the one day that I've had off this week, I should don my plus-fours, tie a hanky on my head and scuttle down to the seaside. Sadly, I only really made it to the estuary so technically, we are still looking at my beautiful Thames but this is where it starts to get all angry, big and a little bit girly.....

Many thanks to lazybones at the forum here for finding that Broadcast voting link. If you don't see Adam & Joe listed, just pop them in at the bottom and vote, vote, vote.
Posted by Auntie_Nubbins at 19:00 No comments:

Where Indeed? - some out of season Footie 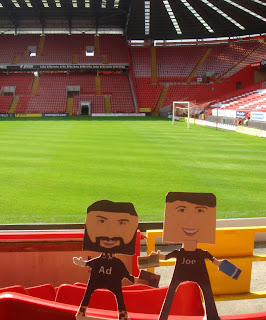 This is not the kind of venue I would expect to turn up in but even less so with my tiny Adam and Joe. I had to do a bit of work here today so I popped them in my backpack & waited for the sun to come out. I wonder if anyone knows where we were, exactly.

They seemed pretty bemused but not wishing to sound impolite, muttered something about writing a new verse for an old song.

Tomorrow's place of work will be less red and green but more blue.
Posted by Auntie_Nubbins at 16:00 No comments: 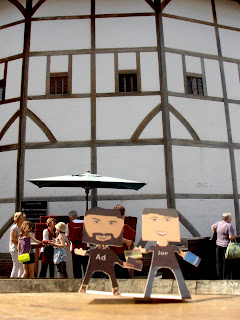 I did warn you that at some point, I'd probably lug the little fellas to a part of river other than The South Bank Centre.

Today we were under the lunchtime shadow of Southwark Bridge and overlooking the Millenium Bridge where tourists always seem to be re-enacting scenes from Metropolis. Since I've covered The Thames in several other shots, I took a close-up from the terrace of Sam Wannamaker's dream-come-true replica of Ye Olde Shakie Spearie Theatrie, just before popping in for a bit of tragedy from Penny Downie and Paul McGann. I say tragedy but it really was very, very funny.

I prefer to get down and dirty at the Globe by standing in the yard because the seating area seems rather separatist. If I was a ponce, I'd say I was a "Groundling" but I try to limit my poncey things to once a week. The production is only running at 90 minutes so we didn't stand for long. Needless to say, my tiny Adam and Joe relaxed in my handbag for the duration. They might have been laughing but the bag was zipped up, so I couldn't tell. I just hope they enjoyed themselves on some level. No wait, they're just cardboard, square-headed replicas.

I went to a recording of You Have Been Watching later in the day. Even though it's in the opposite part of town, it was still by the flippin' river so I didn't bother with yet another watery snap.
Tiny Ad & Joe were suitably amused by much of the discussion, though the poor warm-up fella was enough to make you beg for a fleece in a heatwave. Charlie did a nice little bit about Danny Dyer and I know Joe was eager to chip in. Adam (or was that me?) thought that it would have been a better show if Dr Buckles had taken the place of Frank Skinner.
Posted by Auntie_Nubbins at 13:00 No comments: 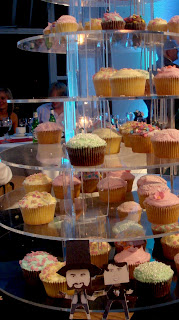 What can I do?
I told them we were going to a wedding but I did stress it was more about friends & relaxing than pomp & ceremony. So Adam dusted off the top hat, which meant he was completely overdressed and Joe, in his own inimitably dismissive way, dragged on a cool but not entirely wedding respectful t-shirt. If I'm honest, Joe turned more heads than Adam and myself. 'Twas ever thus, great lumbering dude.

The official proceedings started in the very late afternoon (last registry time-slot of the day, apparently) which meant we were straight into a fun evening fine food & wines, larks and japes. I didn't reveal my little cardboard friends until most of the cake-eating guests had left and the stunning cup cake tiers were a scene of ordered destruction. 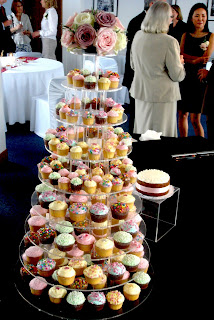 I was really surprised that so many were left because everyone had enjoyed them. They were feather light and topped with pretties. This is how they started the evening as people were arriving. The top tiers were bite-sized and there was a giant version for those more traditional guests that insisted they happy couple have something to cut.


I think they deserve a close-up. 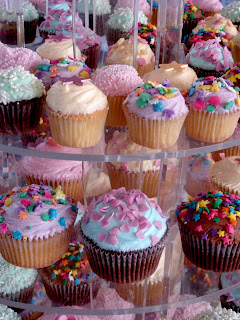 Posted by Auntie_Nubbins at 23:15 No comments: 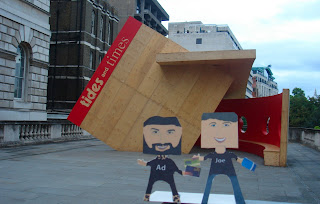 I'm actually starting to bore myself with these now but the stats indicate I should keep going.
I had an intense, but productive day on this little job I've picked up. I decided to relax with a bit of Wim Wenders appreciation down at Somerset House in the evening. The Behind The Screen event was a bit hot and stuffy and really not as exciting as I had hoped so we all went for a wander out onto the terrace & found the Tides & Times Project pod. Have a poke around the site. I suppose I should take little Adam and Joe on the walking tour sometime. Perhaps when this job is finished.
Posted by Auntie_Nubbins at 18:30 No comments: