The value of an oz these days 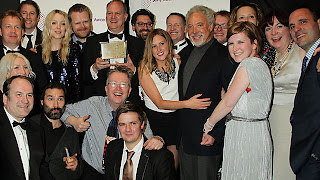 Adam and Joe's 6Music show won a Silver Sony Radio Academy Award again this year! The gold went to the two little old ladies; so effectively our idiotholes were the real winners (in the award ceremony in my head, that is). Joe's already researched the relative prices of an ounce of gold versus and ounce of silver but they've appreciated considerably since then. Catch up with the evening's wiffle waffle here.

The beautiful being that is Tom Robinson also won gold for his 6Music show.

However, it must be said, the most tear jerking moment of the evening was when 6Music won UK Station of the YEAR!
I saved this station, you know. I'm in a club of a few thousand people who would not accept the closure theory. I'm guessing, since you're reading this, that you are too! Aren't we wonderful?

Hello Giggles were clearly on the judging panel.

BUG TV is gaining more momentum as the main audience-based filming seems to be in the can and all that remains is for the bespoke, buckles videos, interviews and waffle to be assembled into eight delicious capsules and blasted into space before they can beam down from the naughty man's satellite in the Autumn.

It's good to know that Uncle Dave was on hand at the recordings, should any corrective maintenance be necessary.

Of course, The Guardian were on this back in March but it's only recently that I noticed this lovely comment on their piece. What an adorable man Count Bucklules is.

Various people have been tweeting about their involvement. For instance, we know that the awesome friends of BUG, Shynola are doing the title sequence and the super-talented David Wilson will be featured in one episode. You can just about read the text of that article from The Sunday Times.

Ian Burrell, Time Lord and Media Editor at The Independent filled a page on Monday, prior to the Sony Radio Academy Awards presentations. "Because the pair are such old friends they have an instinctive humour which delights critics." not to mention the thousands of 6Music listeners baying for their return.

A lot of this piece is about the success of BUG but please note that Joe's contribution came via an email from America. Imagine! This would no doubt have been easy to spot due to the +1 (or would it be +44?) in front of his email address and the fragmented font in which it arrived, not to mention the ungodly hour he chose to send it, plus that annoying delay. I'm sorry but WTAF? 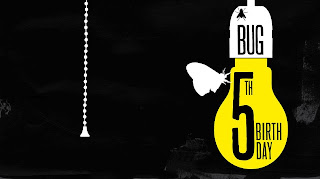 It was the fifth birthday of BUG in it's present form and they made a special playlist Facebooky thing to mark the occasion. 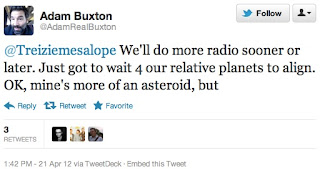 Adam tweeted this at the end of April, about Adam and Joe's return to radio.

They're both so busy but somehow, Adam managed to make a jingle-jongle for this tv ad.

Adam's gigs last night in Brighton went down really well, as ever.

BUG 31 at the BFI (June 14th and 29th) is almost sold out again but, and I can never stress this more strongly, please try nearer the time and on the day.

Remember all the lovely nibbles of artwork used on 6Music's Adam and Joe home page? The talented lady who made them has updated the cover for her Idiothole's Guide. It's a thing of beauty.

The BFI website now has the video of Joe's introduction to Over The Edge for your enjoyment and by some quirk of miracles, @VivaVHS tweeted this picture of the original VHS cover Joe refers to. Furthermore, @VivaVHS also made this cover for Attack the Block!

Joe moved among the muggles for a very special double-bill Picturehouses Podbirthday screening but he was so hot, he set of some alarm or another.

Once again, Joe's name popped up in a daytime telly quiz show. It pretty much reprised the previous incidence.

It gets worse. YouTube have used a picture of Joe Wright instead of Cornish in their auto-list thing. This is what happens when you're out of the public eye. I'm just saying.

There's a lot of chit-chat about Ant-man. Edgar's been talking. He's got the last Cornetto film to make and he wants to make Ant-man. Mr Marvel has said things will get moving during the summer. By moving, he may just mean it'll change status from "I know nothing" to "Something might come of this". Enough people are wetting their boxers over this. I feel I shall not need to deploy the Tena-Lady quite yet.

Nick Frost will be at Kapow tomorrow. It may be too late for tickets. It may not be. I went along last year. It was very spoilery full of lovely previews and trailers. It's in a nice part of town. If that's not enough Frost for anyone, you can catch him chatting to Richard Herring next month. Please book some seats for heckins' sake.

Beautiful Paige Meade from Attack the Block has landed a role in the next series of Waterloo Road! This young lady seems to have boundless talent and energy.

Last time I was driving through Brixton, I saw this pizza & chicken place. Not only is it named after a character in Attack the Block, it is surrounded by the kind of bins in which said character hid for most of the film.

This blogger has put together a load of Attack the Block references.

Italy and Japan are still gearing up for their releases of Joe's film.

If you're quick, you might still be able to get a ticket to one of these screenings at the Film4 Summer Screen held annually in the courtyard of Somerset House. Not one dud among them.

Empire have complied an amusing Avengers flowchart thing and the Incredible Suit has made a Spoterizing Playlist for exactly the same film.

I'd also like to give a link to Adam Batty's eBook thingumy which film lovers might enjoy.

I'm going to end this with a couple of links that you don't really need.

I've been known to use a blog on Posterous for posting sound nuggets. It was 'acquired' by Twitter in March and without so much as a by-your-leave, the sound media I've lovingly kept there since 2009 has not been showing up on some versions of some browsers. I have had to go over ALL 570 odd posts to re-place the media (and I don't mean replace/re-up it, I mean take it out and put it in again). I believe I have finally finished this unwelcome chore but if you find any broken bits, let me have a link and tell me your browser and version. Ta muchly. In case you're wondering, if it weren't for the several hundred hits each nugget has had, I wouldn't have bothered.

Finally, incredible though this may seem, I have a life beyond bothering Adam Buxton and Joe Cornish. Granted that it's not much beyond in so far as it consist of an engorgement of films, a earhole of music, a pop-up of theatre and a tickle of comedy. I've joined that there Letterboxd thing. I don't know if I'll survive the pressure. I'm keeping them short and you might find the tags more revealing than the actual notes in the event that you even care what I thought.

Posted by Auntie_Nubbins at 21:31 No comments: