Once again, I wrote this in August but I reserve the right to be as timey wimey as I ruddy, well please.

Adam popped up in The Skinny this month and there are some pictures from Belfast in this gallery. The Observer carried an interview, the Manchester Evening News had this, The List this and Marielle Osmont wrote this.

Finally in the review department, longtime fan, Sean Murricane not only wrote a lovely blog but got a personal thank you from Adam.

So I got an actual message from actual Adam Buxton saying he liked my blog about him. Still sqweeing. http://t.co/Jj5EETzNlG
— Sean Murricane (@SeanMurricane) May 31, 2013

Ealing council announced a comedy festival in Walpole Park and Adam's doing a Big Tent version of BUG there with the help of the lovely people at Nomad Cinema.

Some of the Best of BUGs around the country have been daubing the hands of visitors with Adam's face. 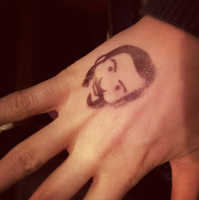 The Prince Charles Cinema double billed Attack the Block with Critters for a couple of evenings in May.

There was a tiny bit more mention of Ant-Man (for which Joe has penned the script with Edgar Wright) in a Marvel update.

At the end of the month, Adam was asked to host a discussion at the Regent Street Applestore with Michael Shannon as he was in town to promote The Iceman.

As with everything he does, Adam immersed himself into thorough research and worked hard to present his own brand of interview. He even made some pictures which, for one reason and another, didn't see the light of day until he showed them to a small crowd at his early Kernel Panic previews.

Adam had the sense that the interview wasn't going well. You'll find it on iTunes in Zodcast form, so you can decide but there were several people who took the time to tweet their delight.


Good talk at the Apple Store w/ Michael Shannon, one of the best actors today! Really looking forward to the Iceman. pic.twitter.com/fS8OpCDpdq
— Milo Hewitt (@MiloFilm) May 24, 2013

I never thought an interview with Michael Shannon would make me cry laughing - @adambuxton I could kiss your face.
— Nicola Richards (@NickyRR) May 24, 2013

You may remember that back in November, Adam introduced The Man Who Fell To Earth as his Screen Epiphany at the BFI. Finally, in May a small clip of the introduction was put on the website.

Someone's put a load of stüffe on the internet.
Posted by Auntie_Nubbins at 20:33 No comments: