Adam makes some more lists
and Joe beams in the dark 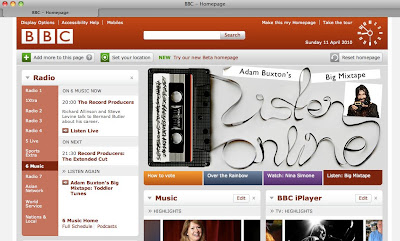 Adam must be about as happy as the day he got married.

He has been sitting firmly at the very top of the iTunes podcast charts for most of the week, having crept into the top five several days before the first show even aired.

Now, he has an almost grotesquely oversized banner on the BBC Home Page, for goodness sake.

While today's show was airing he trended at 8th most popular topic in the UK on Twitter and tomorrow, Prince Charles is going to lecture an entire arboretum about the virtues of listening to him and 6Music to promote healthy leaf growth and fulsome root balls.

It was a fabulous show today. If you need to catch up, the full broadcast is a must. For a convenient recap and a couple of extra bits, download the podcast and check out the tracklist, a photo and more on the blog.

The Adam And Joe Easter Egg Podcasts continue next week. I've made a list of the broadcasts here where you can also find details of the Memory Tape he did as this week's guest on Lauren's feature. After each Easter Egg broadcast ends you can download the podcast from which the aired version was taken.

The Guardian blogged about all the riches we have enjoyed without even needing to mention that Adam was helping to cover for Jonathan Ross as well.

The BBC 6Music Adam And Joe Show has been nominated for a Sony Award again!

These are like the Baftas of the radio world, in fact I always chuckle at the thought that the Baftas may go the same way and end up being called the Oranges. It will seem rather lame to hear Joe say "I've been given an orange for Best Director". Anyhoo, the Radio Academy Awards are more commonly known by their sponsor's name of The Sonys and this year we'll accept nothing less than pure gold for our idiotholes and their production team.

With great thanks to Kevin E G Perry, I have a transcript of the answers Adam gave him in the 'What I'm listening to' section of the Observer New Review today.

"The Mystery Zone"
Spoon
I've been into the band for ages. I think they're a good, tight pop band in an art-school tradition, but very accessible. It's a good one, nice and uptempo. It's a song about escaping and reinventing yourself, doing something crazy. It just went down well. It passed the kitchen-dancing test and got everyone dancing.

"Bad Guys"
Bugsy Malone Soundtrack
I was in a production of Bugsy Malone at school with Joe and Louis Theroux and people, aged 15 or 16. It was a very formative moment in my life. I played Fat Sam, or Slightly Overweight Sam, and it was great fun. That soundtrack is amazing. A guy called Paul Williams, who has had an extraordinary career in music, wrote the Rainbow Connection in the Muppets Movie and a couple of Carpenters hits. He wrote the Bugsy Malone soundtrack, which is one of the best soundtracks ever. "Bad Guys" is a very good and a very funny song.

"Mobile Phone"
Kevin Eldon
It's a ridiculous song about mobile phones. It's like they're doing a kind of Europop, high-energy song a bit like Aqua or something. It comes out really weird and Kevin sings in a weird German accent. That's one that I heartily recommend and goes down well with the children.

"Out of Space"
The Prodigy
An early Prodigy effort from when they were still dressing as harlequin-type clowns. They didn't have too much eyeliner on. It's amazing and it stands up really well.

"Seems To Be On My Mind"
Suburban Kids with Biblical Names
They're young, they were barely in their twenties when they did this, but it sounds brilliant. It's really uptempo, tuneful, slightly wonky pop. They sound like an indie band from the early 80s, jangly with good harmonies. I think basically what it is is that they're massive music nerds from Sweden, who have listened to all that music and are making it now themselves.

"Brave Bulging Buoyant Clairvoyants"
Wild Beasts
I played this to a muso friend of mine the other day and he was impressed by all the unusual chords, so I felt impressed with myself that I was attracted to songs with unusual chords. They've really got something special and different going on. Funny lyrics as well. I would heartily recommend them.

"Ocean Man"
Ween
This is the song that closes the SpongeBob SquarePants movie. This song is amazing. I really like Ween anyway. They're kind of a guilty pleasure, not the kind of thing I would recommend to everyone but that song is fantastic.

"The Enemy"
Guided By Voices
My sons are into war at the moment so I'm trying to bring them down about it. I don't want them to go to war so I'm trying to show them the miserable side of war. I don't know if this song is even specifically about war but it makes me think of being in the trenches feeling depressed about having to go over the top and kill people, but it's also really exciting. It's a really brilliantly epic, well-structured song and it has a very over-the-top, crunching guitar coda.

"Canceled Check"
Beck
The producer Nigel Godrich told me that they were trying to recreate Hunky Dory when they went in to do this. The warmth of that album. I really think they nailed it. It's nice and mellow, a bit of country and his voice sounds great.

"Sunday Sunny Mill Valley Groove Day"
Sir Douglas Quintet
This is late Sixties, and they were country-rock dope-smoking types from Texas. I got into them through Frank Black. He had them on in his car while we were driving through Los Angeles. He took me to all his favourite scenic spots and we had sushi and he was playing this tape in his car of Tom Waits, Captain Beefheart and Sir Douglas Quintet.

"The Man Who Invented Himself"
Robyn Hitchcock
This is the first track on his first solo album after he left The Soft Boys. This is a really good one. Again, it reminds me of Hunky Dory. This is a nice, piano-driven track. I think it's about Syd Barrett. He sounds really great. It's one of the all-time great first tracks on an album.

Of course, there are a couple of tracks there from today's Big Mixtape but Adam's life seems to be a mad maze of music lists at the moment - CMU, Lauren, Observer and his own show. What an ordered little mind he has. Edited To Add: Just seen the hard copy of this and it's a flimsy representation of what the lovely Kevin EG Perry sent to me so a double thank you, there. It does however, include a Spotify link to his list.

Nothing would give me more pleasure than to balance this happy post with a picture of what I hope and presume is the equally buoyant Commander Cornballs. The good news is we have been treated to such a picture but I'm not going to risk upsetting anyone's copyright by showing it here. Just slide along to Edgar Wright's blog and bask in the sunshine of their smiles. [The original image is a full 7.5MB from Flickr]

I can't remember if I linked the on-set photographer, Matt Nettheim's blog before but he posted about the film a couple of weeks ago. It's good to note that he is a friend of Dan Mudford whose name you'll remember from Joe's Little Britain documentary etc. He clearly has his feet firmly under Big Talk's table and we can only hope he's been covering lots of lovely DVD extras for Joe's film too. I'm particularly looking forward to the Special Edition that will contain the director's waterproof pants from the night shoots.

Nothing has changed on the Big Talk production page for Attack the Block but the sluggish old IMDB uprated the status to 'in production' finally. Jodie and Nick's names have been added, as well as what I presume is a supporting artiste.

The telly is on & I was just distracted by Sean Pertwee voicing an ad for "High Definition Tunas". I'm going to resist firing up the ol' Photoshop. Of course, I've seen 1080p dolphins before but never tunas.

I've lost my train of though but I don't think I've missed anything really important since my last post. I might be back on the little Posterous blog with a Podcast Intro tomorrow but I'll leave the rest of the week to BBC 6Music.