With the help of a tireless team of behind the scenes content filterers and fixers, Adam Buxton has taken the Antenna format's fragile pupa on a colourful journey through chrysalis to what has now become more of beautiful butterfly than the common or garden BUG described in the logo.

Last night, that robust lepidoptera flexed it's wings and left it's pheromones all over Leicester Square for what I believe is the biggest BUG event thus far. 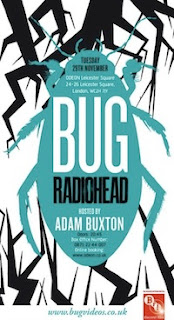 Demand for a BUG Special featuring Radiohead was bound to be high and fortunately, the organisers audaciously secured the enormous auditorium at Odeon's flagship cinema. Whilst it may not be the biggest screen in town, it packs around 1680 seats, give or take and was so flummoxed by the ticket buying frenzy on the night the event was announced that even the staff in the box office couldn't resuscitate the booking system until the next morning.

If that's doesn't discolour Adam's wolf pants, nothing will.

In the actual event, Adam was at his most warm and comfortably confident.

Regular BUG attenders will be fondly used to technical hitches and indeed, some regulars are so blasé about this that they habitually arrive after the scheduled start time. As I wandered up the beautiful, building-site-themed* approach to the event with only ten minutes to spare, there were long lines of people waiting to collect tickets from those stubborn machines and the charmingly interactive Box Office staff.

Despite that, the show started pretty much on time with most people already in their seats.

A delay of no more than a couple of minutes did sadly mean Adam's helmet-cam cycling-to-the-venue film had to be paused with only about 90 seconds to go but perhaps they had good reason. Unlike most other BUG events**, Adam had devised the dreamy title sequence film himself and that gave way to a masterful entrance only marred by the intoxication of the spotlight operator rendering a reaction delay of some few seconds which continued to punctuate other parts of the evening. Adam functions best under these conditions because his comedy reflexes automatically toddle him off in the direction of verbal cover-up which usually results in his audience convulsing and, in some cases, being hospitalised or sedated.

He was mindful of the potential number of BUG virgins so to avoid any confusion, made a slide to demonstrate his name, severally. 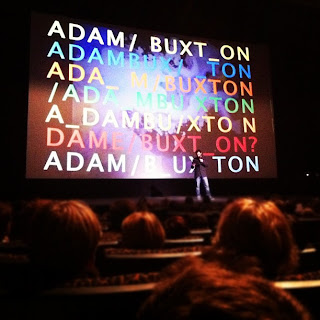 From the lovely Rob McDougall with his kind permission. Please visit Robmac.net

Once he'd dealt with a few house rules, like how to be rewarded with cake for humiliating anyone rude enough to film any of the night's proceedings by shouting and pointing at them, he introduced the first three films, with the helpful note that there is a black space between them carefully placed to allow for whooping and cheering.

I'm not going to embed these because it will make the post lumbering and clunky but the links are all there.

At this point, Adam showed us some samples of what the YouTube community felt about this work. This is Adam's forte. Many people may look at what he does here and think it's a great idea and ripe for imitation. I don't believe anyone can seek out and deliver these comments with the brio that Adam brings and I seriously doubt anyone else would have the tenacity to trawl through them all.

Weird Fishes/Arpeggi: Directed by Tobias Stretch (One of the winners of the Aniboom Animation Contest For Radiohead's In Rainbows)
Street Spirit (Fade Out): Directed by Jonathan Glazer

I believe it was at this point when Adam introduced Jonny and Colin Greenwood to the stage for some chats. It should be noted that there was a picture-in-picture bringing a close-up of this interview to the very back of the highest of the high seats. Poor Jonny was clearly very ill at ease when he discovered this, with good reason because he is uncomfortably pretty.

Adam has an interviewing style which, like his presentation method, makes his audience feel as though they've sneaked into a private evening with a few friends, a bowl of Twiglets and some mulled wine. Happily for us all, on this occasion Adam didn't even seem to be hung up about time.****

He showed us embarrassing pictures and videos, mercurial nuggets and shared private memories of the days he and Garth spent in Oxford preparing and filming for their Webcast.

A lot of this material is online for those keen to seek it out but I feel bound to link this wonderful piece in which Adam's camera defaulted into demo mode while Ed was reading his moving poem. I can report that last night's audience totally destroyed any poignancy herein with their completely disrespectful and raucous laughter when all the nonsense began. It was feckin' hilarious but I think Adam would have preferred a little more chin fumbling consideration.

Adam finally released Jonny and Colin from their blissful trauma on stage to make way for the charmingly besuited Garth Jennings, a beloved BUG regular and dear friend of Adam's. They continued to talk about the Webcast material and the making of Lotus Flower. If there's one glaring omission to this evening's programming it was no doubt done with humility but I would love to have seen Adam's rendition of Lotus Flower one more time. I'm sure he will never be able to put it on his channel but it's a joy to behold....or did I just dream he made it?

Adam read some more YouTube comments from Lotus Flower which, if memory serves is an edit from the time when he showed it at BUG last January, including some turrets and Jodie Foster. You had to be there.

In the absence of Adam's film, please do seek out the multitude of fan homages to this piece. Adam showed this one.

He finally eased Garth back to his seat and wound up this triumphant evening with these last two videos.

I do hope Mr Knight and the people of BUG don't mind me displaying a reproduction of their lovely programme notes below but I'm sure they're too busy celebrating the success of the evening to pop them at their own site for the time being. Do take a minute or two to read them.

I don't usually review the work of Adam and Joe in any great depth because I assume and believe that my unashamed adoration of the pair would render any comment impotent but I felt this event was such a milestone in BUG's history that it warranted documenting. I am fairly sure that I was not viewing the room through rose tinted goggles when I say that everyone from the furthest reaches of my peripheral vision was enthralled by the entire programme and delighted with Adam's presentation. In my capacity as his self-appointed, in no way related Aunt, I was so proud of the way he handled this massive room. It's enormous. Have I said that before? I hope everyone heard him clearly and saw as much as they were expecting. He was utterly magnificent. Oh no, now I've gone too far.

I think that the brief sortie into three BUG BFI shows last year will need to be reinstated for the Spring sessions.

I'm shamed to note that it is more than a month since I waffled in this blog. I am diligently keeping notes to interesting bobbles in my link locker and will address this oversight at my earliest convenience. Given that it's the season of far too many films to see, I have no idea when that might be.

* I have no idea why they picked this theme for such an event. *****
** Usually created by Miland Suman whose work can be found here and around here.
*** Is it rudely inappropriate of me to link a runner-up fave video from the Adam and Joe Radio Show Video Wars competition? It's a thing of beauty.
**** Previous BUG and 6Music Radio Show reference.
***** You know that's my feeble attempt at a joke through gritted teeth as I loathe the time these works are taking and the tedium they thrust upon a film goers most beloved of London squares?
...and please excuse the Attack the Block reference. While I was writing, I did think it was apposite.

Adam puts an enormous amount of effort in everything he does. Turning up on the day is not something this man can countenance as his recent hosting of Never Mind the Buzzcocks will attest.

However, BUG is devised and curated by David Knight of Promo News etc with the help of Phil Tidy, Ballistic, Locomotion and the BFI.

Every other month, BUG looks at the most weird and the most wonderful music videos to emerge recently, thrusts them up on a big screen which is bookended by two delightfully ponce-laden bars. Each event has at least two versions, the first one of which normally invites a guest director onto the stage for some insightful chat, giggles and degree of embarrassment.

Adam's status as a dedicated family man also ensures that he gives a quarterly version of BUG closer to his golden mansion in the Norwich Playhouse and over the last year, since Joe released him from the burden of non-stop radio shows, he has had the opportunity to take a Best Of version all around the British Isles and beyond. His next run of shows takes him all the way down to that special place, AUSTRALIA.

If Radiohead brought you to your first encounter with BUG and Adam Buxton you may have thought you were imagining things when you detected the faintest hint of a catch in Adam's voice when he bade us a happy festive season and gave his goodbye. No, that was not your imagination. He loves his audience and it breaks his heart to leave us. Well, he loves me. He's not so keen on you over there with the funny hair and the strangely tainted breath.

You've been privileged enough to be introduced the perfect blend of music, visual joy and warmly served giggles. I hope it brings you to the next London BUG at the BFI on February 9th & 16th or one of the many other shows.

Tickets always go on sale to BFI members on the first Tuesday of the month prior to the show and non-members can book a week later. There are usually a small number of last minute seats available on the night but this event always sells out online.

Since originally putting this post together, several more photos have come from the lovely people of Twitter. I hope Buckles and the boys (or indeed the photographers) don't mind me gathering these here. I can take them down again but they're all on FB and Twitter. There are almost too many to post here but some links follow:
Great stuff from Ian Davies
One
Two
Three
Four
Jessings pictures:
Dr Buck's Suitcase
YouTube comments
Greenwoods Picture in Picture

Dominic Yard has a shot of the helmet-cam film, as does Humphrey Walwyn and Ross Matthews.

Another interview picture from Rachael Irwin on the far right. She has this one too.

Buckles from Christopher Mahon and Euan McGrath's view from the back of the circle.

Scott Rowlan took these:
One
Two


...and I just found this lovely thing from Petra.
Posted by Auntie_Nubbins at 17:30 2 comments: