There's no better time to visit your back-street ear syringer

With so many opportunities to hear Adam and Joe on the BBC at the moment, you'd better make sure there are no waxy build-ups or foreign bodies in your lug holes.

Adam joined Liza Tarbuck to cover for Jonathan Ross on Saturday and will do the same next week. We have yet to discover if there will be podcasts for these shows. They were like a couple of delightful, giggling children but I hope Adam is able to have a little more influence over the playlist next week.

At the same time, 6Music had the Adam and Joe Show Easter Highlights which will be here for 7 days and the podcast is ready to download but keep thumping that button over the next couple of weeks because there will be more retro podcasts to grab.

Earlier today we heard the first of Adam Buxton's Big Mix Tapes. Adam has tried to imply that this first one might be a bit wobbly compared to future shows. That's just his sweet way. Nothing wrong with episode one at all! The podcast is also good to go and James has put a lovely picture, track-list and the front page of the running order sheets on the 6Music Blog. Adam also recorded a show with Louis Theroux. You really should check out the photo here. I must be getting old because if Adam has the date right (and why wouldn't he?) none of them look like they've passed the hormone explosion period of their lives.

Last week, Adam phoned into Shaun Keaveny to talk about the show. You can listen to the clip here.

From a couple of days before his show, the podcast subscriptions were steadily carrying him up the charts and he was resting at position 2 in the main chart tonight, with The Adam and Joe Show sliding into 15th place in the comedy charts as you can see from the screen grab up there.

In the fullness of time, I'd imagine some lovely people will make all the recent shows available in various forms here.

If you have a Spotify Premium account, you can access a playlist that Adam made for CMU.

Chris Gower spotted this Adam and Joe reference in the XBox360 magazine.

Adam and his colleagues gave some wonderful, hearfelt speeches at the Save BBC 6Music protest. You can watch them here. Do have a look around the rest of the site and perhaps you'll want to join in their campaign to get Joy Division Oven Gloves in the charts.

This report claims 'thousands' attended which seems like an exageration but it's good publicity and the BBC could not be seen to be covering it. The Guardian reported here.

The videos for Adam's "Changes" have started to appear. The first real contender was a stunning and hilarious group project by all the Facebook teamsters.


I was particularly thrilled by the inclusion in that video of an image from this person. I unsuccessfully tried to get his permission via Twitter but I think it's so clever that I'm going to post it here anyway and remove it if he gets in touch. 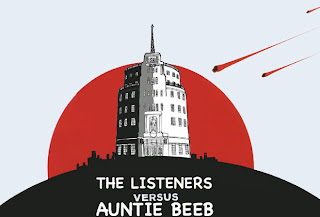 You can check the artwork on which this is based here.

Here's a lovely fan-video that popped up this week.


I'm not happy with this post. It seems like a bald list of information and I can't seem to inject any fun into it today. I'm wondering if this blog is wearing itself out a bit.
Posted by Auntie_Nubbins at 17:00