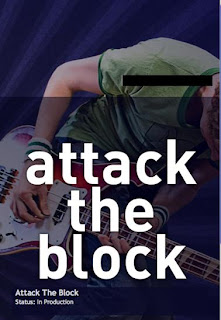 Leading on from last weeks entry, Attack the Block had it's wrap party at a small Georgian house in Soho on Sunday. I'm sure sore heads were enjoyed by all and I'm guessing they showed the little Cannes promo reel in a loop somewhere about the premises.

Now that the production status is about to change, the IMDB is laden with credits and Big Talk have tarted up their site but not added any more ATB info. Oow, how I'd love to get my sticky little fingers on some errant coding over there.

The new BFI July booklet plonked onto the doormat revealing the dates & times for BUG20: Thur 15th July 20:45 and Fri 23rd July 20:45 (Director's Cut) BFI Members booking starts from 1st June but mere mortals have to wait until 8th June. Heck, it only seems like last week that we went to BUG 19.

Last week, we went to BUG 19. It was the usual fun night despite the fact that Adam had been too busy to view all the content they showed. Happily, he had not been too busy to create a brand new entrance song, several YouTube comment routines and present a completely awesome edit of The Footie Song. I'm trying to think whether I've even seen that on the big screen before. If I have, then it would have only been the C4 version. This was magnificent. We have to hope that Adam will put it on YouTube when his hectic life calms down a little. If you're prepared to take a chance, grab a last minute ticket for next week's show. They always have returns & it's incredible to see these films projected so beautifully.

That's the thing about BUG. The wonderful team are in a position to get right back to the source and use the optimum quality footage to throw up on the screen. It makes wish your laptop was like Stretch Armstrong & you could bother it into enormo-vision proportions. 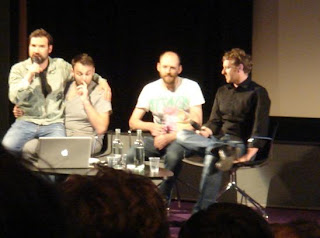 His guests were the once quartet, now trio that goes by the name of Shynola and who work under the umbrella of none other than Ridley Scott's empire. Adam has hung around these guys for a long time, exchanging awesomenessities. It all started when they began to dabble in ventriloquism and they welcomed the opportunity to relive those halcyon days with Adam at BUG.

This week's Big Mixtape was further enhanced by the warmly welcomed return of Garth Jennings. I sense that Garth idolises Adam as much as Adam idolises Joe. Garth opens the door, sits down and just giggles at everything Adam does. He must be the most rewarding type of friend a person can have. He also sounds sensible and silly at the same time. I want a go on one of those, please.

Each time I think THIS is the best Mixtape show so far, Adam manages to surpass it with the next one. I'm not the biggest fan of Adam's shouty routines but the one he did this week made me leak with laughter. I reckon this catalogue of shows will be one of those things that people talk about in thirty years time and boast about 'being there' when they first aired. I should say some of this shit to Adam on the blog really but he'd probably think I was insane. I'm really looking forward to Sharon Horgan. I have a feeling they'll be bouncing off each other like a couple of schoolgirls' playthings.

Collins and Herring will continue to take care of the Saturday morning show until August at the very least. George Lamb is leaving the 6Music family in July so conjectures will be dribbling around the mouths of the various net-based social soap-boxes.

The BBC Strategies Consultation website went into meltdown today, causing them to extend the deadline for submissions. It will most likely be months before all the entries can be read and assessed. 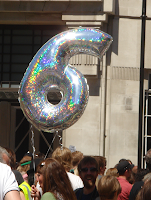 The second Save BBC 6Music protest day was blessed with warm weather and a good PA system. You can see pictures and videos if you poke around here.

Adam said he would try to make an appearance but I didn't see him around. What with rehearsals and recordings, Mixtapes and voice-overs, BUGs and what-nots, I quite thought he'd go home to the family before heading back to record the Horgan show and then off for the Amsterdam BUG tonight. I have only heard one person say they saw him so maybe he did just that.

Richard Herring brushed past me on the way to the stage with his side-kick. He stopped to take off his jacket right in my vicinity. He mentions Adam's Birthday Time song in their latest Collings & Herrin podcast. I think he described it as 'brilliant'. What an idiot - I think my dictionary might need an upgrade. I may have misunderstood but it would seem that Richard also played a Song Wars song before his Lyric show started on Sunday. 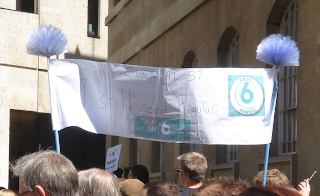 This couple made me smile. They'd secured their banner to a couple of feather dusters. I was fascinated as I watched them diligently roll it up again before going home. How wonderfully practical. 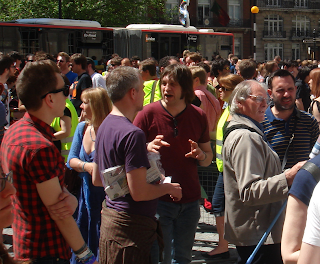 I snagged a quick shot of Shaun and Matt but when I looked at it back on my computer, I saw I'd also caught the iconic, Ben Mercer.
Finally, with thanks to the Love6Music.com site, I had to link this wonderful Adam and Joe t-shirt.

The dearest and most glamorous Adam and Joe fan in the twittersphere deposited her own mixtape on Adam at Bug. He was clearly so touched and chuffed. He included wonderful picture of it on the blog.

Adam did a voice over for an Oxfam ad. Click the link for a piccie. 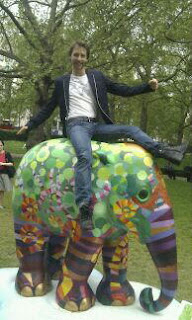 Chesney Hawkes tweeted a picture of himself that looked so much like the kind of silly pose Joe might have struck in bygone days, I had to pop it in here. In truth, Joe would probably have done something more provocative with his eyebrows and poked his ludicrous tongue out but in this cornish desert, I take my thrills where I can find them. 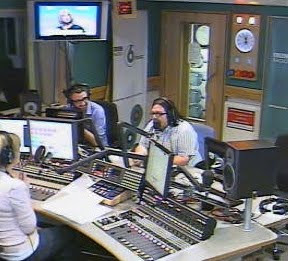 Nick Frost has been all over the retail outlet promoting his Amis drama "Money". I couldn't resist a little snap of him with lovely Lauren last week but I couldn't be bothered to get out of bed to snap him with sexy Shaun today. Nick has been very careful not to divulge anything spoilery about Attack The Block. Catch up with episode one of Money here and you'll be nicely prepped for the conclusion on Wednesday at 9pm.

On a sad note, the UK arm of Funny Or Die closed on Friday. I think the material will still be available on the server until the domain name sub runs out but there's a giggle shaped hole in my daily routine now.
Posted by Auntie_Nubbins at 19:30