Pithy blogpost titles are for people with a lisp

Get your fiddling fingers out and pay attention to this call-to-arms from Little White Lies. Their next issue will feature Attack the Block and if you've been silly enough to pass this publication by at your newsstand thus far, I can tell you it'll be a collectors item......just like every other issue. You can have your own custom-built rocket included if you get your sticky fingers organised now!

It's been a testing week for those of us with Attack The Block search alerts. One tiny, teeny little tweet sent the machine into the far reaches of the blogalaxie and it returned to our atmosphere with all kinds of space junk. I won't link anything. There are lengthy paragraphs out there based entirely upon these few words: 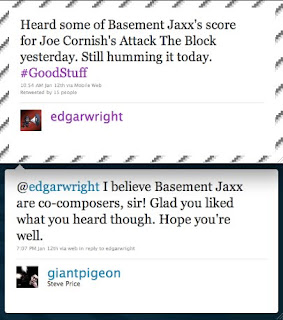 It would seem that Basement Jaxx and Stevie Price are in charge of the score which should be a wickles solution.

On 30th December, the beautiful Ritzy Cinema hosted a screening of Scott Pilgrim vs. The World, introduced by Edgar Wright and he came back for a Q & A afterwards. There are some pictures here with thanks to James Kent. One can only imagine he spent the interim period watching telly and snacking on Caramac round at Joe's house because the silly, long fella snuck in to get a taste of what it might be like when he has to do the same.

Edgar also hosted a pre-recorded 6Music show on New Year's Day. For some of it, he was joined in the studio by his blood and ice-cream chums, Nick Frost and Simon Pegg. Even three of them couldn't fill the links on their own so they called the professionals. The professionals were too hung-over to help so they had to get Joe on the phone. You can hear the resulting bed-bound waffle here. I can't be arsed to look but if you were interested, I'm sure you'd find some kind of fan portal that has preserved the entire show for your enjoyment. It was ruddy good.
Lewis King made a Spotify list for many of the tracks played.
Last night, Edgar implied that he might get writing on the final part of his trilogy but a couple of days earlier, Ant-man was on his mind.

The Incredible Suit is looking forward to Joe's film. I couldn't work out a pattern for the order he put these films in so I can only suppose it's relative to the amount of excitement generated in his suit. Otherwise they're in dry cleaning ticket sequence which would amount to the same thing, probably.

If you're near any of these venues and can catch this short you'll be treated to a little bit of Adam's voice. There are no less than five showtimes at Sundance. If Adam gets going with his Twitter account again, perhaps we can ask him a bit more about it. It was directed by the awesome Meebox credit maker, David OReilly.

Adam Buxton, reptile keeper, has named a meerkat after his brother, which is nice. Mate, if you're the same Adam Buxton with that Twitter account, can you get in touch with @AdamsBigMixtape?

There's an additional BUG Röyksopp Special on Feb 11th though it's all but sold out. There will be more tickets released nearer the time and it should be a wickles night with Röyksopp DJing in the Benugo Bar afterwards. Don't forget to check for gig info here.

This is from 2008 but I just noticed Adam signed the Knock2Bag guest book back then.

A couple of Adam related items are going fairly cheaply on Amazon at the moment here and here.

It would seem Adam may have found somewhere warm to take the family over the festive break. This was posted in Adam's YouTube comments which he has to sanction so I presume he's happy putting this info out there.

We can only imagine how many diseases he contracted and issues he dealt with during the flight and his stay. In the old days, he would have spread that kind of information out over six or seven 6Music links and probably built a Text The Nation topic around one of the saucier events.

Whilst on the subject of Adam going on holiday, don't forget to keep an eye out for the Guardian in a couple of weeks.

There are still 18 podcasts up at 6Music although I thought they were only going to be around for 30 days. They have kept Adam and Joe bobbing around in the top 10 comedy episodes for a couple of weeks.

Another old XFM show was unearthed a couple of weeks ago. You can find more details here.

Foxtrot Studios are attempting to profit from Adam and Joe. It would be remiss of me not to mention it but hmmm. EDIT - the app seems to have disappeared now.

The #lametofame hashtag brought some amusing results from Amanda Gardner and Sam Bowman.
I'm not a great fan of scanning mags for the internet while they're still on the newsstands but Leeon Jones tweeted this, bless 'im. He tweeted this too!
I guess Dom works in post production.
Nick Frost seems to be dipping his toe back in the muddy birdbath of Twitter again.
Robbie spotted this Kill Boggins poster in Great Titchfield Street.

Terry Alderton has been able to get on with his primary function now that Vampire Weekend have eased up on their touring.*

If you're not familiar with these reviews then erm, familiarise yourself. Same goes for this.

This is just odd.

*Reference from the Glastonbury 2010 Band Facts