There was only one other serious contender in the Best Radio Show or Podcast category at the BT Digital Music Awards.

For this year at least, the best man won. It would have seemed odd for the Adam and Joe show to have walked away with the prize after such a l o n g absence when Adam's own show was so wonderful and well received. Joe was there, though. The Metro included a photo of them together here.

It took a while for the official website to confirm the award but Twitter was first with the news and James Stirling quickly updated with two photographs on the BBC 6Music Blog.

Naomi grabbed a photo with Adam. This was a jury awarded prize rather than a public vote and it didn't get much screen time on ITV2.

Adam had this to say to 6Music News. 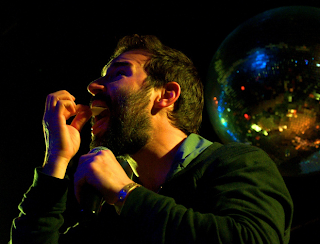 The hard working organisers of 6Fest enlisted Adam's help and winning magic last night by asking him to pick tickets in the first main raffle they held. There were two stages at the venue and the festival was running for almost twelve hours so some people left for meals and some air. This meant that for the first few draws, there were no takers. The official line was that the prize should be set aside until the ticket holder came to claim it but after dutifully doing that with the first one, the revellers were less accepting of this dictate and urged Adam to draw again. It seemed like a repeat of Thursday night at the BTDMAs when the first five awards were given to luminaries that could not be present.

Put on a spot and now with a baying crowd of heavy drinkers, Adam promptly ate the unclaimed raffle ticket and drew another one. This did of course, set a precedent and I think we have all witnessed Adam when he's on a comedy roll. I believe he consumed a total of four tickets. In his completely reliable style, he made an otherwise dull-as-ditchwater part of any event absolutely hilarious.

The third prize had no immediate claimant so he ate the ticket and then the holder finally made themselves known. The next prize had two claimants and the fineprint serial numbers had to be compared for the genuine winner. I'm not even sure what Adam ate in this case but I'm certain he didn't go hungry. He went on to lead a Happy Birthday chant for one audience member and you'll be thrilled to hear that he stayed with the traditional version rather than delight us with his questionable alternative.

Many thanks to Chris G for that wonderful photo. You can find more in his Flickr album. 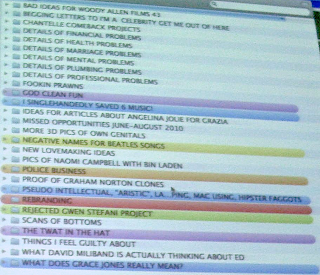 Earlier in the evening, Adam gave a twenty minute set which included him showing the Saltman's wonderful Save 6Music film with Adam's version of Changes, an hilarious presentation of his appearances on Channel 4 News, and a live rendition of his clean 'Help the Police' skit followed by the enraged YouTube comments.

He also gave us the news that his Gwen Stefani Hollaback Girl video will probably not appear on YouTube because he is concerned that the copyright catching filters may result in his channel being revoked which would be like chopping off his w'lloy, I'd imagine. He did show it to us though (the film, not his w'lloy) and somebody grabbed a few seconds to give you a flavour if you've not seen him do this.

He finished his set with a live literal rendition of Grace Jones' Pull Up To The Bumper Baby. If you have not collapsed into helpless giggles when he's performed this at one of his shows before, take a look at these lyrics and step into Adam's brain for a moment. You'll get the idea.

There are a few more photos of Adam at the main 6Fest website. It was a really fun and diverse evening. So many of our favourite 6Music DJs were there, pouring their love right back at everyone who took part in the preservation of this beautiful station. The wonderful team also included an Adam And Joe based puzzle in their programme.

I think I've got a lot of other nonsense to relate but I don't want to clog this post up too much.

There is however, one more piece of winning news. According to the Film Distributor's Association we finally have a tentative release date for Joe's film, Attack the Block. If you type the film title into that search box, you'll be rewarded with a date of April 8th 2011. This is no more set in stone than the return to 6Music in November but on both counts, we can remain optimistic.
Posted by Auntie_Nubbins at 20:55