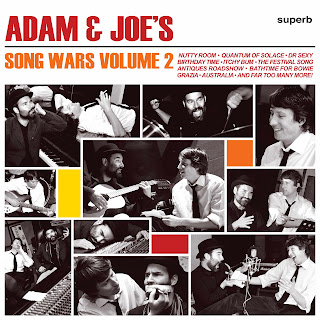 There's more information that I can be bothered to paste if you grab the pdf on this page at Dreamboat Records.
*They have a download of Festival Song available.
*There's hi-res artwork!
*It's going to be available on VINYL!
*The vinyl has a gatefold sleeve.
*The hold-in-your-hand CD has a six faced thingumy.
*Hopefully there'll be lots more artwork lovingly collated by Adam and lazily endorsed by Joe. Unless my tired old memory is failing me, there are some dupes from Volume One in the listing but perhaps they are remixes! (Dr Sexy, extended grubby mix Feat. DJ Nippy Nips)

Edited To Add: The official news page at Dreamboat says that pre-ordering will be mid-November.

As soon as I have an iTunes link for Song Wars 2, I'll tweet it or blog it or mumble it under my breath in the middle of Oxford Street, or something.

I know the press release says they will return to 6Music soon and I had really hoped to have something more concrete to post about this but I am still treading cautiously until we get the official nod.

In other information-too-tardy-to-describe-as-news, Adam was invited to host the Vimeo Awards in New York so he managed to squeeze in some gigs as well. You can read his very own blog for more details of how it all went. The lovely, furry comedy pumpkin was so excited he blogged. three. times. about it. It's all I can do to stop myself from plopping some crass hearts emoticon in there.

Caroline Harstsell was kind enough to share a picture and so did Ben Collins while Twitter's Widow Spider brought us this.

This prompted me to have a poke around and I found Carrie Matthew's lovely photos from one of Adam's gigs at The 100 Club.

While I'm thinking about Adam's gigs, Catherine Bray's blog entry popped up too late for inclusion in my 6Fest post so I'm putting it here. Sadly, her companion dragged her away on some spurious food-based pretext before she could see Adam's main show but she caught the joyous raffle.

Sinister Dexter has a beautiful shot of Adam with John Shuttleworth from that same event.

To complete the 6Fest content, Adam was kind enough to customise and sign (including a forgery of Joe's name) a radio for a charitable Ebay auction. Some dementedly generous soul paid £ 223 for the lovely thing.

There are still some 6Fest items available for purchase here.

Adam has been so busy lately. He's no doubt been spending lot of time and consideration arguing with Joe about how the new Song Wars Album should be put together but he's also been doodling.

Furthermore, the BBC have released the second episode of Country Man. Are there really going to be twelve of these? Will there be a boxed set in time for Easter, I wonder?

He is also hosting another BUG Special on 12th November for Ninja Tunes. It has sold out but tix will be released on or around the day.

If you can think about next year already, Adam is doing another gig at the lovely Tabernacle. Tickets are available here.

I'm going to finish up with a link to The Guardian's piece on Studio Canal, whose logo will most likely be the first thing you see after the certificate when you sit down to enjoy Attack The Block. There is also an entry for the film at Digital Cinema Media. It's all coming together nicely. 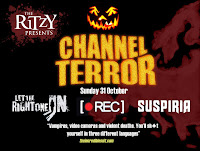 Attention Londoners: Film4 have a FrightFest special all-nighter at the Empire this weekend and theBFI IMAX have something similar. The Ritzy are a little more civilized with their Halloween show. If you're at a loose end and want to scare yourself silly the choices are endless. If you're not in London, the chances are you will find a similar event somewhere in a 20 mile radius of your home.

Edgar Wright has done a 6 MixHalloween Horror Special which airs on 6Music this Sunday with John Landis guesting. He's had his little rest and has recommenced blogging in preparation for the US disc release of Scott Pilgrim v. The World.

When leaving home is something you can't be arsed to do for the sake of getting into the Halloween mood, the least you can do is watch this wonderful film from clay-botherer Lee Hardcastle.

If you're visiting London, you may want to have a copy of the Underground Film Map in your pocket.

I am still awaiting the adoption papers but in proud Auntie-like fashion, I'm going to draw your attention to Song Wars Electric Proms winner, Ben Mercer's latest video via an article about him.

I can't remember whether I linked this before. The comedy area of the BBC webworld has a 'collection' suggested by Stephen Merchant which not only includes Adam's "Nutty Room" but also some other corkers.

Finally, if you don't already watch Varsity TV, change your habits. This is a star in the making. I do urge you to also look back over the work from previous terms.