A little stuff and nonsense

Adam was distinguished yet again last week by being the only human to gain 'cool' status at Stuff Magazine's Cool List. They have a fabulous picture of him and he's in good company with Scott Pilgrim There's also a small piece in the latest hard copy of Stuff. This is from Metro.

While I was bothering the international webplace, I stumbled across this cameraman who worked on some of Joe's film school pieces. It makes me grin stupidly to think about a young Cornballs jumping around like an over-excited puppy while trying to remain cool-looking.

There's a little more info about one of the films here including the fact that Ronald Lacey (from Raiders of the Lost Ark) shot this the year before he died. Jonathan English, the then young man who produced for Joe, went on to produce Mike Barker's Wilde based "A Good Woman" which was on telly last Sunday. Last year he directed Ironclad in Wales' answer to Hollywood (according to Mr Attenborough). I remember noticing some of Joe's Block crew had worked on that film. 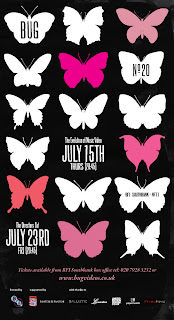 Adam has a couple of BUG gigs in Norwich, kicking off at The Playhouse on Thursday and then at the Music Video Festival next week. Tickets for BUG20 at the BFI have almost sold out but it's a pretty flyer so I'm going to put it here. 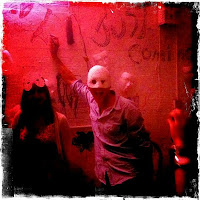 This young man reminded me of a young Joe and while I remember, some cheeky tweeters sent me this Stephen! based picture from the Doodle Bar at the Albany last weekend. That's such a Joe pose!


Adam also did a "Word of Mouth" in the current issue of The Word. If this image is too small to read (click first) there is a slightly better version here.

Adam's Big Mixtape is still going from strength to strength, staying at the top of the 6Music iPlayer charts throughout the week. There was a ripple of dissent as dedicated listeners were struck in the podcast area this week when an overlength version confounded them, followed by the unexplained demoting to 'UK Only' status when the perfectly formed version was uploaded*. I think James might be investigating that before the next pod is cast.
Adam was spotted at the weekend Pixies gig and talked about them with Graham Linehan in this week's show, though it was recorded before the gig. Do, do, do take a listen. It's a perfect show.

Paddy Considine was meant to be recording with Adam today but had to wash his hair at the last minute so Ken Korda has stepped up to the plate like the true professional that he is. This leaves the field open for some very creative entries on the blog, I feel. Of course, if Dr Roobles lived a little closer to town, I'm sure she would have been a worthy guest, and any excuse to replay her Paul McCartney tapes would surely bring the show closer to a Sony Gold next year.

This weekend is the anniversary of one of my most favourite, hyperventilatingly stupid shows so I may play it in lieu of my usual Collins and Herring routine. I am sure I will be forgiven for just this one weekend.

If you have an addictive nature that needs some nourishment, look no further than this gizmo which I think was linked by Adam's latest guest, Mr Linehan himself. If you search around Twitter you'll find some sequences to paste into it too. If that doesn't engage you for long enough, it's fun to revisit this lovely Flickr account.

There are some gorgeous photos from Tom Robinson's Glad to be Grey birthday concert evening at the Shepherd's Bush Empire, here. A silly diary error had me double booked that night but I'm so glad I raced over there for the last couple of hours. It was a really beautiful evening and I had Shaun W breathing on my neck for a while, which is enough to make any girls' day.

Edgar is shipping more and more Scott Pilgrim footage out there to his hungry diciples. I'm still managing to avoid looking. Only a couple months to wait before it fizzes onto my retinas like a box of Standard fireworks.

Remember Adam's lovely Mixtape guest the other week? There are some cool photos of Emmy The Great here.

*As ever, there are ways and means beyond the BBC for acquiring both the full and the pod versions of the show if you're prepared to poke your dirty fingers in all the wrong places.
Posted by Auntie_Nubbins at 12:00