Buxom Blogging and a fiddle zone

This is bound to be a bit Buxton-heavy again. Is it my fault that he's as ubiquitous as John Barrowman and Joe is being so bloomin' precious about his little video drama?

The 6Music concern is still keeping a high profile and Steve Lamacq added his voice to the cause last week. The BBC Trust page is here and to make it even easier, this is a really helpful page.

If you want to join in a friendly meeting of supportive minds, there will be a gathering at the end of the month. Details are here but I'm quoting in case you don't use the Facebooking.

We have lined up some well-known speakers and live buskers to create an air of festivity. This is a celebration of our beloved station; a demonstration of support for the staff, musicians, and a collective show to the Consultation team that we do not want to lose our station.

What the BBC proposes is unacceptable. 6Music is the only place that caters for our diverse tastes; the only station where you will hear Howling Bells played back to back with Seasick Steve; The Isley Brothers leading into dEUS, Delphic, Yeasayer and all topped off with dash of Half Man Half Biscuit.

The DJs play the music they love for people who love music. It is valuable showcase for new bands and artists, and regardless of what the BBC thinks, we will not find this on Radio 2.

So please join us on the 27th. Come along to show your solidarity and support; bring a flask of tea and have a sing-along all in the name of saving 6Music. Invite everyone you know who might not have been invited through the Facebook group and let’s make this a protest to remember!

Broadcasting House is Located on Portland Place, W1A 1AA.
The nearest station is Oxford Circus although it can also be easily reached from Great Portland Street.

See here for a map of the area:

Adam has enlisted 6Music's own Tom Robinson to help make a version of Bowie's Changes as part of the 6Music support campaign.
It would be too much to hope he'd perform it during the above meet-up but more excitingly, people will be invited to make videos to go with the song, just like the old days of video wars. I'll bet the Emmett family can hardly contain their creative juices right now.

Keeping with the 6Music news, Adam has made a pilot show based on one of his long standing passions, the mix-tape.
Read more about it in a post at the BBC 6Music blog. That post has had a record number of responses and everyone seemed excited to know that Julian Barrett joined Adam. Won't it be satisfying if this gets commissioned?
There's more about the show and some priceless remarks in a wonderful three page interview with Adam at Shortlist. John Plunkett swiftly brought the pilot news to the mass media.

Earlier today, the same lovely John Plunkett organised a webchat with Adam! How enjoyable was that? It was flagged up on Monday and the webchat is here but you can cut to the chase and just read the responses here.

I've got quite a bit more Count Buckules stuff to post but I'm going to take a brief moment for Dr Sexy.

Recent updates on the Attack the Block IMDB page add a frail piece of substance to my musing about some of the prosthetic and puppeteering work being done Stateside but it's all good stuff. Still no news about who the cinematographer is.

For some reason, the lovely people at Playlist decided to post something about the casting tweet we saw last month. I don't know if it's genuinely to do with them only just stumbling across it or if they have some privileged information that prompted today's post. Nick Frost's tweets imply that he is not shooting it at the moment but for that matter, neither is the loose-lipped tweeter.

If the apparent two moons bleaching the streets of South London were anything to go by, night shooting continued last week. Joe must be looking pale and weedy.

I really can't manufacture any more Cornballs news so it's back to Buckles. 4OD have put Ladies and Gentlemen on their YouTube Channel. It has an age advice warning so I'm linking rather than embedding.

Adam brought BUG18 to town last week and there was an added frissant in Twitterland due to the amazing work of @WickWox (see last week's post) and her incredible collection of well-wishes which she presented in scrapbook for the great man himself. @Monastico made this beautiful felt sleeve for it. You may have read in the webchat about the joy it brought to Adam. 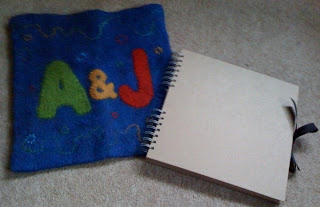 The BUG evening itself had some technical problems and Adam had intended to play his version of Changes (see above) to us but he just sang a couple of lines instead. It was completely wickles. He also showed us this project and once you've got the hang of what that's about, click here to see Adam's contribution. I'm not going to embed that one because it's totally out of context if you don't visit 'In B Flat' first.

I also saw Adam in a beauooootiful little short film the other week, directed by Matthew Walker and Arthur Cox. The quality of all the films was very high but Little Face stands a very good a chance of walking away with a prize on the 8th April Awards Night.

Adam has appeared in the line-up for Latitude again, bringing a special tent-based version of BUG to the country folk. He sounded unsure about it earlier but he was probably just being modest. I'm sure Corin Hardy will cover for him if he can't make it. This festival gets bigger every year but I hope it doesn't loose it's charm.

So finally, Adam made a small but worthy contribution to BBC Radio 1's broadcast about making fan music videos. He mentions lots of his work so I'm going to put them in a little fiddle zone below.

It's a shame there is nothing more to say about Joe. If he's lucky, he'll be having a lot of fun and I'm sure there are plenty of lovely young assistants tending his needs. I'm secretly quite pleased there's not too much information about his film out there. All the better to enjoy when it's released. I do hope he's not too jealous of Adam's lovely scrapbook. Surely, he'd have had one too if there was a public appearance in the diary but that's not his scene at all. Any seemingly bitter comments made here about him can be instantly ignored. It's my coping mechanism because I miss his stupid voice and lanky bones. Thank goodness Adam has so much energy to share.