I'll just dump some bits on you tonight because my fingers aren't choreographing quite as Busby Berkeley would have preferred right now.

The Leicester Comedy Festival has been all aTwitter with Buckles love and Simon Button is now proudly sporting this joyous picture on his home page. 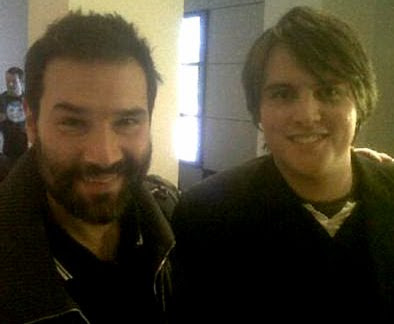 An innocent tweet earlier in the week provoked several lovely geeky sites into editorial meltdown with the news that the hithero dozily dreaming Ant-Man project was clearly just taking a lot of bunched-up power-naps. It's thrown back it's bleary head, downed a triple Espresso, stretched all three pairs of legs and scuttled along the formica worktop to the steamy kitchen of production. (I need to stop right now, don't I?)

Keeping with the Wright/Cornish news, there have been further updates on the IMDB page for Attack the Block, the most significant of which was some concrete casting news. Luke Treadaway will play "Brewis". I could bore you all with my Treadaway waffle for ages of pages but suffice it to say he's been a Philip Ridley poppet on stage and also appearing in the long awaited (by me) Heartless due for release in May by which time we can only hope that ATB principal photography will be in the can and he can dance around the junket circuit with candid waffle to delight us all. He was last seen by my eyes with all manner of gloopy stuff dribbling over his poorly clad body with his twinster at the Royal Court - a Mark Ravenhill play. This boy has made some enviably cool choices in his career so far and that doesn't look like it will stop anytime soon. We won't mention The Innocence Project (much). I wouldn't say it's 'The Persuasionists' of his cv but it was one of those 'good performances, clunky writing' pieces. Other additions to the IMDB imply that the Art Department are getting locked into position too.

I'm rather frustrated that the gaffer has been listed but we don't yet know who the Director of Photography will be. Julian White worked on Enda Walsh's "Chatroom" (the cast of which included the 11th Doctor when I saw it on stage) which I believe was part of the deal in the Film4 package that included Attack the Block and has been rolling out over the last 18 months. The DoP would have chosen his gaffer rather than had one imposed upon him so someone's got the job and has probably been prepping with Joe for weeks now. We just don't know who that is. I know I'm sounding stupidly geeky here but there is so much serious kudos attached to this film. I have a funny feeling that the industry types must be creaming themselves to get on board. If Mr Haughty weren't consumed with trembling, girly apprehension, he'd have a moment to burst with pride.

Studio Canal are doing their duties to the film at the EFM part of the Berlinale . I'm amused to see Joe's name in a sentence with Rowan Joffe and Percy Adlon.

Remember that lovely little short Adam appeared in a couple of years ago? It's being subjected to a public vote in the British Animation Festival and can be seen around the country this month. Check here for details near you. You need to look for Prog Three but frankly, they'll all be wickles. There are stills to whet your appetite and here is a that tiny clip from YouTube.


BUG 18 tickets went on sale to the public on Tuesday and sold out a couple of days later. At the risk of sounding like a broken mp3 player, in my experience there are always tickets on the day if you don't have to make too many hard and fast plans and can take a risk on it. Smite me for saying it but the 'director's cut' is never usually as good value as the first show but it's better than no show at all.

There was a bit of grammar brickbatting over on the 6Music Blog with a suggestion for a t-shirt to wear whilst listening to podcasts in public areas. James also took us down memory lane with a bit of Stephen streetware at the blog.

Finally and with deep respect to Andrew Collins and Richard Herring, I'm going to post my daily AdamAndJoeByte earlier or later than usual tomorrow because I was chastised for appearing to poke them during their broadcast last week. I don't have enough twollowers for that to really make one jot of difference to anybody but if it peeved Andrew, that's one peeved person too many and I am bemused but sorry.