How easily we become blasé. Edgar posted a third picture of Joe (in as many weeks) and I didn't even bother to link it. It made it's onto the Guardian Monkeyblog, but I couldn't be arsed.

Of course, that is not, in any way a truism. I was fumbling with other areas of my life and felt the need to rest this little blog for a few days.

Other Adam and Joe items to pop into the brainial cranial this week have been a couple of new blog entries giving a selection of their FAVOURITE Black Squadron photos from both the Pan Hat command and Poltergeist invasion. The blog entries also give links to the full galleries because their pledge to safeguard the listeners' trust means they have to pretend that there are no favourites.

There's a sniff of a rumour about something Count Buckules might be doing and lots of buzz about his dear, thomosexual friend. Once again, Adam will be presenting the MVAs at the Odeon Leicester Square for anyone lucky enough to get tix. Adam continues to narrate the BBC2 Philippe Starck doco Design For Life, he's doing a DJ slot tomorrow evening and a stand up slot in the 100 Club at the end of the month.

Joe is doing absolutely nothing at all. Not even playing with himself.*

So we come to the Electric Proms. The sweet, innocent jocks actually believed they weren't going to get any entries. It really never entered their fragile, self-deprecating minds that people were taking time to make amazing audition tapes.

Obviously, nobody would want to suffer the fate of Toddy Pipkins, the poor little lame boy whose sad disabilities might mean his entry won't reach them until a nano second after 4pm on 14th October, 2009 but people love Adam and Joe so very much.....
1) They want to impress them more than anything else they hold dear in life.
2) They want to see what other people do before they commit to their masterpiece.
3) They want to stand a better chance than the next person of actually worshiping in the comfort of Boggins' basket.
4) They know that idiotholes like me will find their entries, blog their entries, probably even tweet their entries and generally expose them to the ridicule of recognition.

I could go on but I was boring myself again. Do a search on YouTube and you might see some of the recent offerings. My search skills don't seem to be brill enough to come up with any MySpace results as yet. Don't forget to try for some tickets to watch the event.

In other news this week, I seem to have adopted a habit of changing my Twitter name to whatever catches my ear in The Show of the Week and on this occasion, it happily coincided with James' choice of podcast title. This feature may well be a one-off and cannot, in any way, be guaranteed as reliable.

Seen Ricky's film, seen a lady-man in a dress tell me about her life for a couple of hours, watched a week in the life of Orson Welles, saw David Hare's new play but the one thing I may not be in a position to do tomorrow is.........fully immerse myself into BBC 6Music listening.
I'm pretty sure I'll find a way to make Black Squadron but it may not have my undivided attention and if you're hoping for some more demented Twidiothole action, you'll be languishing in the joy deficit department.
I do what I can. What I can't do, will do no harm. 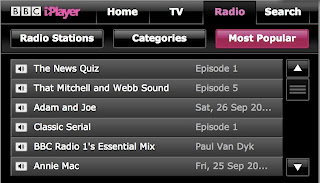 Sunday afternoon at iPlayer. Be proud.

* Joe is working, of course, like a ninny on his hoody film, chewing the end of his pens with Edgar and the Ant, playing with himself and anyone else he imagines into his little world.
Posted by Auntie_Nubbins at 09:59