Adam kicked off the month with four gigs for "Comedy Central Live" in Stockholm and Gottenburg but there was precious little evidence of it.

Joe shunted over to L.A. for who knows how long.

@Monastico exhibited her felted artwork of Adam and Joe.

Adam got jiggy with the Brighton audience.

Edgar & Joe were tightening up the Ant-man script and there were casting rumours of Paul Rudd and Joseph Gordon Levett. On the 24th, Edgar tweeted a picture of Joe. Thedgar. 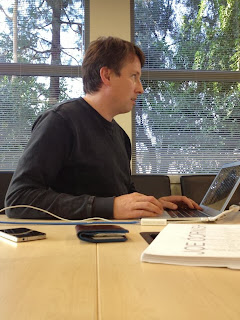 Sarah Anne blogged about Adam's first live show in Glasgow and then BUG went to Bergen.


At the end of the month, Lou Reed passed away a tad too soon but after a rockin' good life so thoughts turned to the sexy rock tortoise.
Posted by Auntie_Nubbins at 21:38