Not for the want of trying but I failed to grow a substantial moustache this month and shall hasten to return all sponsership monies received post haste.

Adam hosted the YouTube Awards from Abbey Road. The whole evening was live-streamed and there's plenty of evidence at the AdamAndJoe.com fansite.

Film4 finally scheduled Attack the Block to air on the night the action was set (bonfire night). I'm still waiting for a theatrical venue to have to guts and foresight to do the same.

Attack the Block's scorer, Steven Price has made a beautiful, award worthy job for the Gravity soundtrack (and also The World's End, out on DVD & Blu-ray NOW!).

There was a lot of chatter this month about Cornballs being cajouled into directing Star Trek III, having turned it down in May. Mr Pegg's word is in the film here and JJ Abrams approves of the notion but Joe's still not attached.

Way too many people moaned about Jack Whitehall pinching Adam's Baaaddad idea. The first ep was fun. It has it's moments and it's more than fifteen years since Nigel first made his appearance on the Adam and Joe Show. I think we're ready to survive a different format by now with out a twissy-fit. Who watches BBC3 anyway? (I do).

Adam did the voice on the trailer for next year's Loco Comedy Film Festival.

Yet another tea time quiz show featured Adam and Joe in one of their questions so I gathered a few together here.

Adam had sushi with Black Francis. 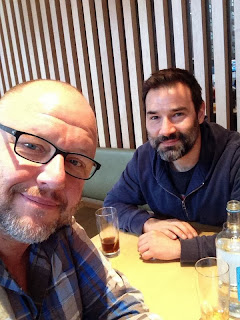 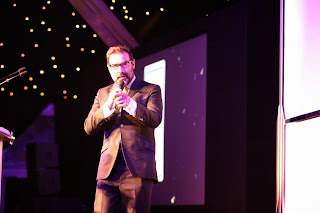 The month wound down with Adam presenting the first of three BUG 40s at the BFI.

His special guest was the adorable Ian Pons Jewell . A young man called Steve Quinn was in the audience. Imagine how he must have felt when this popped up.

These were the last BUGs he'll preside over for a while as he's taking a break to concentrate on some stuff "of his own", as it were. I'm hoping a Christmas adblogpost might reveal a few more details but he's certainly worked very hard this year. He insists (well, mentioned in a tweet to Roo) that he won't be away for long.

Trivia: I could be wrong but I don't think Adam donned his lovely spectacles at this BUG which makes me wonder if he's been messing with lasers or sutin.
Posted by Auntie_Nubbins at 22:28