Roll Up, Roll Up! Get Your Fix of Adam and Joe Stüffe

In this week of equilibrium, a balanced newsburst is the least I can offer.

Joe's film is primed to be thrust into your living room apparatus and Adam is taking his joy to the people of the North West again.

This time, Adam and the BUG Special Crew are bound for Liverpool and to the FACT which contains a Picturehouse wherein he shall be giving the full power of his delightful nonsense not once but twice in the same night. Not many men of his age can boast such an achievement.

The glorious Picturehouses (or City Screen in Urbanese) take pride in lovingly teasing every frame of a film through their cotton-gloved fingertips before they allow the eyes of their beloved punters to view it. Much of this night's footage will be supplied on DVD, which they will feel compelled to make into an attractive mirror before the night is through. If you're still wondering whether you should buy that ticket, take a listen to indie movieland's most accomplished podcasters as Sam and Simon chat to Buckles himself. Note that Adam speaks of doing a Big Mixtape Christmas Show which will be wonderful but makes me even more doubtful of getting an Adam and Joe Christmas Show.

You must be thinking that the Picturehouse group sound too good to be true but you do not know the half of it.

Back down in smokey London town, The Ritzy is not only showing Attack the Block on the big screen again but they're doing it for FREE as part of the Brixton Reel Film Festival. I would simply implore you to only snag one of these seats if you fully intend to use it. My heart would break if the auditorium was half empty because chancers were too lazy to turn up or not release their seats. This is not a shonky, money-grabbing multi-plex. It's a palace of dreams with a beautiful sandman at every turn.

If you can't be bothered to venture further than your front room you'll not miss out. Attack the Block will be available from 19th September on a disc. That's this Monday, in old money. If the effort of finding your credit card is all too much for you, there are several chances to win a copy. Count 'em.

I guess if I was a little more active online, they would have sent me a stash to give away. I'll put a bit more effort in with Joe's next film.

If you can't wait to win a competition or you want something a little bit special, don't forget that Play.com have an exclusive Glow-in-the-Dark cover version. The novelty will wear off but you can boast about it to your grandchildren.

The news stand mags have lots of lovely features which you can get a sniff of from my Facebook page but why not dip into The Incredible Suit's closet for a tantalising résumé.

I'm not sure what the 2 Disc DVD set has to offer and is showing as out of stock at Play so perhaps it's a placeholder for a sexy, extended extras version containing press tour footage and fan-made homages. Amazon are only showing a 2 Disc DVD or the Double Play set so I'm guessing the DVD ships as a 2 discer, regardless.

If all else fails, SKY Movies Box Office start showing it on Monday too.....from 7am and finally, if you're in the States, your discs are being rush-released on 25th October.

Finally, attention all young DJ's. Here's your chance to win £500 worth of gear and A LOT of DJ props.

Adam has previously presented a small BUG show at the BBC Music Video Festival (19th September to 1st October) but he has his regular Norwich BUG #8 shows (2nd date now added) scheduled for a few days after it ends so he may just wander eagerly around in the audience this time. It's worth noting that Jamie Thraves, director of The Low Down (briefly featuring Adam and Joe) will be at one of the events.

Tickets are not on sale yet but Adam will be introducing a very special evening at the BFI in November.

If you're a member of Oz Squadron, you'd better get yourself signed up here.

Alex Grace took some photos of Adam and Joe for the forthcoming World of Wonder 20th Anniversary book.

I'm not sure if this will be a worldwide trend but Tintin has concession fodder as detailed here. I have yet to see the bookends fashioned with a likeness of the writers.

That's all the future news. Here is some trapped wind from the past:

Adam returned from Edinburgh drenched in the love he so effortlessly engendered. Please note that Adam's blog now allows you to comment at him. Be nice.

Blockbuster had a exclusive Attack the Block rental offer starting on the 9th September and the fools didn't pimp it once. No wonder they're closing down.

BUG put a page of their besties together.

If you haven't listened to Richard Herring's Edinburgh Podcast with Adam, please do so now and read the warm words he shares on his daily blog. Adam also did an unexpected turn at the Comedy Club for Kids while he was up there.

Surely, there must come a time when Adam can be referred to as All of Bug and Joe as Half Writer, Half Director? In fact, Time Out were already on the case. Several reports confirmed that Joe was in the audience at the lovely Queen Elizabeth Hall gig. Sadly, on this occassion, I was not. Mark George reviews Adam's Greenwich show here.

There's a ton of Attack the Block stuff to share but I'll confine most of it to my reference blog when I get a moment. I just wanted to put this Q&A video here, filmed from the audience in Berlin at the Fantasy Film Festival.


I can't compete with pretty ladies like this. Is it any wonder I skulk in the corner?

Just because we need it:


You can see the extraordinary Chris Salt in his lair during this piece for BBC Click.

Lovely Jude Adam Mason had her little baby girl, Milly on 24th August. You'll remember her giggles and her constant battles to produce an Adam and Joe Radio Show that wouldn't get them all fired.

This made me chuckle: 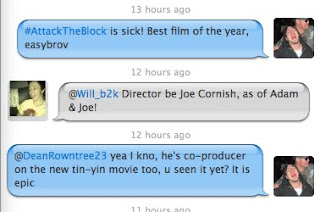 It's very amusing to read Laura Marling referring to her 'scorn bucket'.

If you've spent the last couple of years dreaming of how cool it would be to own some really practical merchandise from Duncan Jones' film MOON, why not click your support at this poll.

..........and if you've been horribly let down by your internet DVD store of choice, fill the waiting time giggling at this offering from Funny or Die.
Posted by Auntie_Nubbins at 10:30