From my point of view, the biggest news nuggets of the week are: 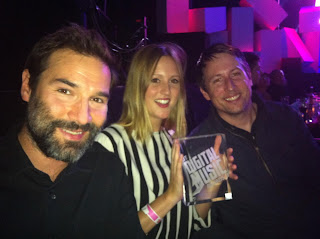 The Adam and Joe Radio Show for 6Music won the Best Radio Show or Podcast Award at the British Telecom Digital Music Awards! 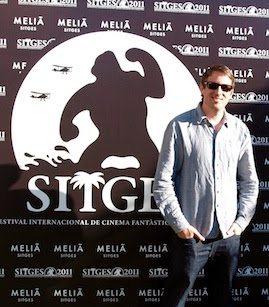 ...during an interview in Sitges, Joe Cornish said he'd got all his material together for his next script and just needed to sit down and write it. Another tweet implied that some post production might take place with him in 2012. This may have referred to Ant-man but it's all good news. I wouldn't want to guess how many of these themes will be covered.

To finally see Joe standing with the wicked Sitges logo behind him makes a silly old Auntie very happy. 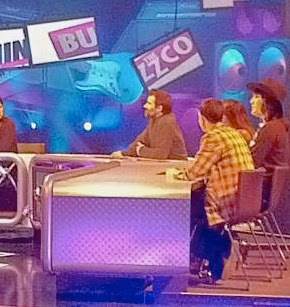 ...Adam Buxton hosted an episode of Never Mind the Buzzocks which will air this coming Monday. This is such delicious news. Hosting the show is both prestigious and I would imagine far less daunting than sitting on the bench, wondering how you can make an awesome contribution whilst firing off your panic neurons. It's my guess that Adam will seem very comfortable in this position and I have spent the last couple of nights re-enacting a fly-on-the-wall scene wherein Adam is asked to be the permanent host for the foreseeable future and a vast some of money with pension benefits. Of course, the BBC don't work like that but I made it clear this happened during my sleep time, didn't I?

.....and these glorious ingots of information spurred me on to make another turgid blog update. You know the format. There might be something in here for you but don't hold your breath.

Our favourite idiotholes are busy doing such diverse things that I've started to attempt an event diary type of things*. Big of the E&OE with this one.

Sitges continues to run until Sunday and Attack the Block is in competition. If Twitter is a trustworthy social witness, it has already taken gold in the hearts of everyone who attended one of the three screenings. Joe topped up the tan on his otherwise lily-white limbs by introducing the weekend screenings and holding one of those 'panel' things to the clear delight of everyone around. There are photos and videos in the wonderfully saturated Sitges diary on days three and four.

Joe is in New York today and will talk to Museum of Modern Art goers about his film tonight. Luke Treadaway will join him. At the weekend, Joe is joined by John Boyega for a panel at the New York Comic Con and Marvel will be streaming an interview with him on Saturday at 11am EST.


Attack the Block won a couple more awards in Europe and has been nominated for a Writers' Guild of Great Britain award. Since my last blogpost, the film came out on DVD, Blu-ray, On-Demand and some Sky channel or other. The discs had exclusive covers and booklets, depending upon where you bought it. HMV had a huge poster by their escalators for a week. It went straight into the top three of both charts. It sold out in Sainsbury's by the Tuesday.

New cities in the States are taking it on still, even though the discs are released in a couple of weeks. It's been added to the festivals down under in Canberra and Brisbane, where it is the Opening Night Film.

She may have only seen the film a paltry five times but Kartina Richardson has made a lovely blogpost. I am woefully behind with my side-blog dedicated to the film but I have all the links stored & will get around to it. There's a lot of lovely poster art out there.

Before I leave the film I want to link this competition (now closed) because there are some cool things to listen to. I hope Joe is proud to have inspired such a thing.

Adam is BUGging all over the place so check my silly calendar to see if he's anywhere near you.

He made a wonderful blogpost the other day, proudly sporting a shot from the BT DMAs and a lovely banner advertising his King's Place gig.

You can catch him chatting on Dave Weekly and you can hear some chat about his gig at the Queen Elizabeth Hall here.

Uncle Dave posted some sweet teenage pictures via Twitter. I'm not sure how public he wanted them to be so see if you can find them without my help.

Even during this open-ended hiatus, Black Squadron are inspired to rework jingle jongles.
Text the Nation (In the style of Tom Waits) by Pete MacDonald

*If you're too frightened to click on my calendar, here's a rough idea of what Adam and Joe are up to over the next couple of months.