And then there is this mash-up


Then there was this poster and brief review from the Green Man Festival (the one in the Brecon Beacons).

BUG with @AdamBuxton last night. Much laughs. Great to have the big screen up in the theatre @DigitalBrighton #BDF15 pic.twitter.com/c5GEa1HY2h
— The Old Market (@TOMvenue) September 3, 2015

Radio Times did a piece on adverts before people were famous and somehow, on that pretext, they decided to shoe-horn Adam's video of him larking around with Joe and Louis. Imagine?

I was thrilled to attend BUG 48 tonight because Jonathan from Everything Everthing was the guest. That's double win, for the record.

Then he was up to Manchester for a birthday gig.

@AdamBuxton you're on a train with a great guy who considers you his hero. He's freaking out. Pls be nice if he gets the balls up to say hi.
— Stephanie Bartlett (@StephanieEphani) September 6, 2015


Messy Goes to Okido aired for the first time on 7th September.

And the following week, it happened. The imbalance on the planet shifted a little way back into place as Adam launched Series One of his own podcast, starting with Louis and Baaadad. Wired got in quick with an interview.

As you can imagine, it shunted it's way to the top of the podcharts quicker than you can say "bread rolls" 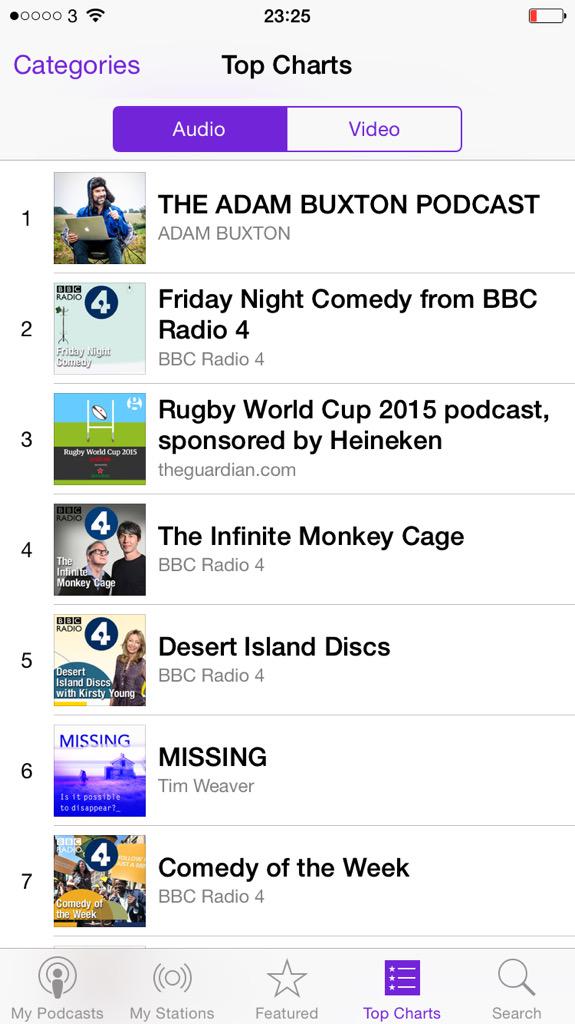 As the weeks rolled on, the wonderful Sally Grosart persisted in illustrating each pod. Adam has put most of them on his blog but just in case, they're gathered here.

Toward the end of the month, Adam hosted the AV Awards.

And Joe went to a BFI event in Manchester to discuss his film from the olden tymes.

Got super excited to meet a hero of mine, Joe Cornish. Somehow managed to play it cool and not break in to song wars pic.twitter.com/QmUXpd7wuI
— Tessa Inkelaar (@Tess_mon) September 26, 2015


Casually listening to @AdamBuxton 's podcast on the train, and as if by magic he walks past me, probably to the loo. Hello!
— Joseph mears (@Mearsie33) October 5, 2015

I don't know if you knew this already but John Boyega, who was Moses in Joe's Attack the Block, has been cast in the latest sci-fi sensation. He talks about it here.

Adam will do anything for a free dinner but hosting catering awards was more than he could have hoped for.

Excellent Visual Find of the Year goes to this:

I don't even know what Pro Max UK is and I'm certainly not going to waste any internet time looking it up.


The original Saltyman made a film for Adam's intro jingle.

Scroobious Pip invited Adam into his podcast shed and while he was about it, they did a switcheroo in the interviewer/interviewee department.

The top secret film that Garth Jennings teased in Adam's podcast was made public.


Then he raced back to London for the Beatles BUG Special.

November 3rd also brought the news that Channel4 have commissioned a full series of the Graham Linehan & Adam Buxton comedy "The Cloud" on the strength of the unaired pilot they did. More deets here.

Film4 showed Attack the Block in it's rightful slot - late on bonfire night.

No peace for the delightful. Adam hosted the UK MVAs on bonfire night.

and a couple of days later, he was at the Union Chapel.

....then another charity gig at KOKO

Miranda Sawyer has been holding the flag high for Adam and Joe over the years and is firmly behind Adam's podcast. You can listen to In Pod We Trust here.

On the same weekend, Gemma Cairney featured an old "Best of Adam And Joe" sequence on this show.

Then the month of November ended with the sad passing of Nigel Buxton. The news didn't break until a couple of weeks after the fact but the fascinating obituary is here.
Nigel made blog entries from time to time, which you can read here.  He had an incredible life and my heartfelt pained facial expression goes out to Adam and his family.