Adam started the month by joining a bunch of other wonderful comedians on the stage at the estimable 100 Club.
He did a brilliant set without his laptop! He's a fully functioning, independent giggle machine.

He also did some Work in Progress this month at The Invisible Dot. I don't know whether he was flying without the aide of an Inter Net again but the Twitter reports were all shiny.Oh - I see someone mentions 'youtube bit' and wait, yes....there's a photo of him with a laptop. I am an idiothole.

If you are not familiar with the noise made by a camera person who it totally besotted with Joe Cornish, you can learn something here.

There was a friendly little interaction between Giles Coran and Adam. 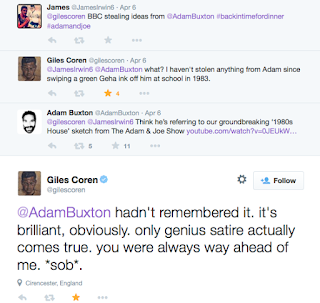 John Boyega has not forgotten his big break.

Franz Drameh, one of John's co-stars from Attack the Block, has also been cast in a news-worthy film.

This isn't something I found on the net. It's a snap I took in my local supermarket.


I can't help but think that Joe Cornish has been snooping around here, pic.twitter.com/D0PiLtNlna
— Raving Ponce Machine (@AuntieNubbins) April 18, 2015

Towards the end of the month, things became a little fraught with anticipation of A New Podcast when people started to get this message. 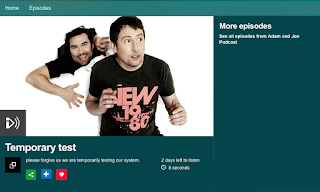 but James calmed the situation down nicely.

As I said earlier, Adam did some shows at The Invisible Dot and managed to fit in a guest performance in Simon Munnery's Fylm School on the same night as one of them.

I am twelve years old and what is this? Go here if you missed this.

Knowing Joe's love of Coldplay, and because I have the brain of a small child, I found this amusing

Do what? :D RT @jcornishgallery: Joe Cornish & Chris Martin 'in conversation' Fri 1 May @ 8pm ahead of their May exhibitions.
— Raving Ponce Machine (@AuntieNubbins) April 26, 2015

These tweets from one of  The Invisible Dot Work in Progress shows:


The sexy DILF @adambuxton. I laughed my ass off. The #youtube piece is my fave. Inspired pic.twitter.com/wcIiI5QHgH
— Layla (@LaylaMS21) April 29, 2015

The dates for BUG 47 were announced, and it's back to the old format of a show with a guest director one week and then two shows, the following week.

There's a Hot Fuzz dissertation to fill your coffee break and that's it for another month.