Adam and Joe's 6Music show has been nominated in a couple of Sony Radio Academy Award categories again this year and if they win, this might be what they look like....except a tiny bit older. 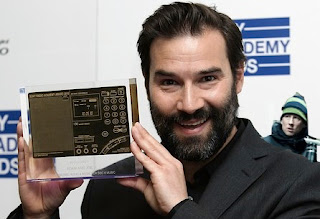 By way of a reminderal, BBC Radio Two have featured no less than three 'Best Of Adam And Joe' shows in their '6 on 2' strand lately.

At last, the plans for BUG TV are falling into place with Adam recording shows at the Riverside Studios and making other insane content. It will air on Sky Atlantic in the Autumn, hopefully. They've given him his own page already!

Adam has been making brand new videos for this show. These include some covering Buxty's songs and a few made for bands that missed out on having their own vids when they were originally released. He has also put his Hollaback Girl on YouTube.


There's a little quote from Adam in this piece.

Adam has added Green Man Festival to his list of Summer BUGgery.

Adam hosted the satan's little helpers fest at last month's British Arrows and in the true spirit of shameless exploitation, featured one of his tottlings in a spoof ad, currently also showing at a BUG near you.

A proud plinth-maker posted this picture of Adam from last month's Music And Sound Awards.

At last, we have someone sensible, explaining how the flip to make a decent cherry bourbon.

Attack the Block had it's first Japanese public screening in Okinawa last month and then a premiere in Tokyo on the following Monday. Joe and Nick were invited over to promote it although the general release is not until June. Rintaro Watanabe was kind enough to share photos and also linked this one. I can't find any video of the event but here's another shot of Joe and Nick. They're on stage here. I have no idea what's happening in the picture that goes with this article.

Edited to add:  I'm a numpty. There's a tiny bit of video from Tokyo here. Nothing from Okinawa but they have a subtitled trailer here.


Meanwhile, back in London, the awesome young cast represented Attack the Block at the Jameson Empire Awards. The film was not so lucky that night but it continues to show at festivals and win awards. It has also been nominated for The South Bank Sky Arts Award and was featured in this random Iowan event.

The Fanter Film Festival gave it top billing in this poster and be warned of a blood curdling start to this trailer for the fest featuring an Italian dubbing of Attack the Block clips. 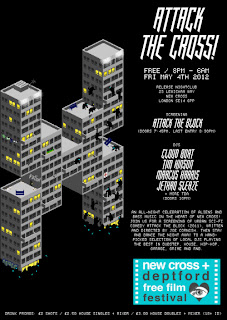 You can still watch John Boyega talk about his role in My Murder. John recently shared this picture of his parents with Joe.

There's a Free Film Festival in New Cross Deptford starting in a few days. They're showing Attack the Block! In fact, it's a night of New Cross Alien mayhem as they Attack the Cross. (see the poster, there)

A week after New Zealand finally got it's theatrical release, the ATB DVD and Blu-ray were released in Australia.

Italy sees the theatrical release of Attack the Block next month but no matter which translation engine I used, this piece is bemusing.

Joe's name has been mumbled in the hungry fighting and before I go, here's some Japanese Attack the Block stickers with a soft toy.

I've decided to fill in the gaps on this page by giving a short revival to my Monday morning, Podcast Intro Song thingumy.

Louis Theroux was talking about his latest documentary on The One Show last Friday and Mr Evans played Adam's mentile Groove is in the Heart video.

In other Saturday morning slot related news, Peter Serafinowicz has put his 6Music pods here and Richard Herring disappointed millions of women by marrying himself up to another. A second series of Andrew Collins' Mr Blue Sky has begun on BBC Radio Four.

Finally, this Drawception popped up on the twinternets from Lizz Lunney. 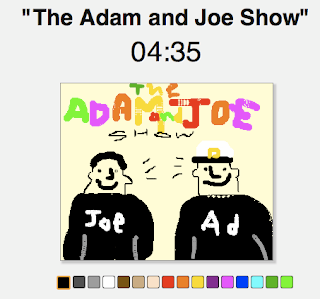 .....I'm sure I've missed something important but I've run out of steam. Enjoy, if you possibly can.