When Joe came on stage to answer questions after viewing Attack the Block at Empire Big Screen, it was inevitable his opinion of the recent disturbances, some of which took place in that part of London he loves so much and calls home, would be sought.

Someone has kindly sent a transcript of his response. I've been unsure whether to share this because as always, the timbre of Joe's voice gave more quality to his reply than the words on this page can convey. He answered with clear thinking, humility, lucidity, calm concern, reserved passion and inevitable humour. 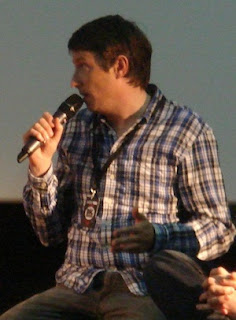 Q: Given recent events in London like rioting and stuff and the kind of comment, usually by the media and things that young children are watching these things do you ever worry that the film might come out in a negative light?

Joe: No, I think it's got a very positive message, this film.

It starts off with them doing wrong and we make no bone about that but as soon as they do something wrong, shit falls from the sky and punishes them and then it's actually even more hard core than Mr Cameron ....(while he defends his action)......but they get killed..... I don't know if you noticed.

It's a story of redemption. You know, Moses sees the error of his ways.

I think the only possibly slightly provocative thing about Attack the Block is that it's optimistic and it's positive and it's unafraid to be positive about kids who've done something genuinely bad. If that's controversial then I'm cool with that. I think what's very important right now is to be positive and inclusive.

Aside from that I don't see that it's got a huge amount of connections. I actually think what happened over the last few days is a big cluster of all kinds of issues, part of which is connected to what Attack the Block is talking about and indeed what a lot of British urban movies have been trying to communicate over the last ten years. I hope people do listen to young people a bit more after what's happened.

This was probably one of Joe's last opportunities to discuss his first feature film with an eager audience in the UK. I've been stupid and yet fortunate enough to attend several of these events over the last few months and have come to realise that one of the main obstacles to him returning to 6Music is that he seems to have slowly acquired a level of of aplomb, devoid of ramshackledocity that simply will not do for the radio show.

We can only hope that a few months at home, attempting to write his next feature but procrastinating with only the cat to talk to will restore the muddle to his brainium and reduce him to the idiothole-cum-ponce that can deliver more award winning nonsense to our wax-filled earholes.

If you want to read more from Joe and his film, have a rummage around here.