Forgive me BlogDad, for I have sinned.
It has been twenty days since my last post.

It's not as if there's been nothing to talk about but I haven't had a spare moment.

The return of the Adam and Joe 6Music Show has been phenomenally successful. Jo Good was positively squealing with excitement as she counted down the minutes to their first show. Miranda Hart was looking forward to them. They were trending on Twitter by 10:20 am on 2nd April which must surely be the benchmark of success anyone would aspire to in this day and age(worldwide too). It was still trending forty minutes after the show ended. The Black Squadron command garnered more than 350 submissions and the Text The Nation topic was so loose it made a cassoulet of my brain. All around the world, a sense of joy popped in the hearts of even the most jaded listener.

The show has gained a resident artist, James Hood whose Black Squadron picture is plastered on one of the webcams for the duration of the command. James is a fine gentleman but he seems to have a distorted, Hall of Mirrors view on life. He is summarising each weeks' show in a picture that Lucy will be posting on the blog.
He also provided a glorious banner for the main, grown-up BBC website for the beginning of the week.

The team were ceremoniously greeted by welcome bunting, forged in the creative foundry of two dedicated and beloved fans. You can read a little more here. I kept an eye on the webcam all week and the banner endured until sometime while Radcliffe & Maconie were on air from Manchester, the following Thursday. 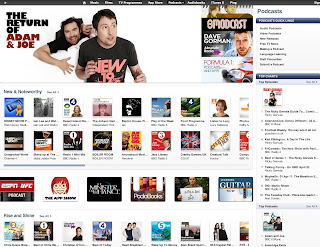 We were promised a podcast by Sunday but frankly, we've been promised things before. However, in the actual event, the lovely production team gave us the cherry on the cupcake by 7pm on Saturday! Not only that, by soon after 9pm it was riding the crest of the iTunes podcast waves with the number one trophy in the main chart! For some dubious reason, iTunes list the episode chart first, with the main chart underneath. It seems that confused poor Buckles and he had the notion that they were only the top of the comedy podcast chart. This isn't the case. It is definitely the main chart (they are still there as I write) unless the 'Play of the Week' and 'Five Sport' suddenly became hilariously edgy.

Knocking Mr Gervais from the spire of the individual episode chart has proved more difficult but they did spend a while in the second position. This week, the Radio4 Friday night comedy show has given hope to knocking Ricky off but we're not there yet, despite the enduring banner and featuring efforts.

No matter, the main thing is the Adam and Joe podcast is King of UK Pods and has not faltered from that position since two hours after the first one was cast. It should also be noted, such is the dedication and excitement of their following, that they hurtled up the chart to position two in anticipation before the first one had even been released.

I could mumble on about the show for hours but you wouldn't be here if you hadn't listened to them all yourselves so I'll spare you. I'm not one for favouritism, as you know but so far my favourite bits were when Joe got upset but couldn't rant on air so had Adam do it for him. It's the fracture in Adam's voice and the gentle cues from Joe that crack me up. The Brian Cox/Toffee link pleasured me on so many levels. The genius of "Smarties Make Me Naughty" shows all the signs of becoming a meme, judging by the response if you put it into a Twitter search. Of course, I am also loving the lizzard tales from the podcast and the Sandwich Conspiracy (the town of Sandwich is in Kent, Old England, Joe).

Have a look around the 6Music Blog for all the delights. There's even a wonderful video of Adam making a jingle.

As I think I mentioned in earlier posts, Adam has announced BUGs in both Manchester and Norwich along with the regular London shows and I believe there may be some standing tickets still available for the Sod Cancer gig in which he will appear at the end of the month. The team ran in the Marathon at the weekend. If you can't attend the gig, please give a few of your pennies here.

The Buckular highpoint of April so far was his Technical Meltdown at the BFI. He put so much care into the show (it seemed to me) including the helmet cam, audience calmer film of his cycling journey from wherever he had been staying, right up to the doors of NFT1. I wanted to pop right out of my disguise and give him a hug for putting that together. He did the first half hour completely in character as Famous Guy, there. I'm going to be honest and say that he had hitherto not been my favourite character but seeing him properly live was a treat and a privilege. I am duly converted to his sublime delights. Adam would describe the rest of the show as being his usual format of playing some of his films and singing along to them, then playing other people's films followed by reading comments from the You Tube community. I've seen him do both these things many, many times but this night's show had a different edge to it. There was so much heart and a different kind of intimacy in the way he was working with the audience. It was utterly splendid.

Joe hasn't been idle either, try as he might to grab a snooze on the sofa or even a holiday. I shall probably make a lumbering great post about all the online Attack the Block media I have been collecting but the hard copy stuff is coming through at quite a pace now.

Little White Lies is bi-monthly so you still have some time to seek out a copy in quality newsagents or Picturehouses cinemas and I cannot recommend it more highly. There is good stuff in the May issue of Empire too. You've missed your chance to get a copy of SFX with Jon Hamblin's lovely interview in the stores but I'm sure it's available digitally still. Other film and Sci-Fi mags are carrying stuff but frankly, it's more generic. I can't comment properly on the interview in Clint because I have yet to find a copy but there's a tempting taster here. Watch out for next issue of Dazed and Confused which should carry an interview by the deliciously exotic Limara Salt. There was also a gorgeous piece from The Guardian's Eve Wiseman in The Observer at the weekend. The photograph is stunning and I'd probably consider blu-tacking it to my bedroom ceiling for the image alone. The fact that Cornballs is the featured artiste just adds to the frisson.

The important but unspoilery stuff you might like to know about the film is that it has found US distribution via Screen Gems but I don't believe there is a release date at this early stage. If you want to absorb as much spoilerage as possible before seeing the actual film (why would you want to do that?) or are too immature to slide in under the 15 certificate wire, you can sate yourself with three trailers, two clips and five character profiles knocking around the web and a little Behind the Scenes featurette in various portals. The Attack the Block Facebook page should point you in the right direction but they seem rather tardy (tardier than me) at posting stuff. That said, they have three pairs of tickets to see the film tomorrow (Wednesday, 20th April) so do seek it out.

Joe gathered Luke Treadaway and John Boyega into his arms and lugged them to the first ever Kapow Comic Con. This was a real trial for me but video cameras were there so I hope to see their output available at some point closer to the release date. I gather some of that footage may pop up on the DVD that Joe is currently punching into submission somewhere in Soho. Apparently, it may include an on-set massage but that information may be spurious.

I've asked Joe, via a Facebook message, if he'd indulge me with a net-based interview about the film for this blog but he's been steadfast in his resolve to keep as far away as possible from a crazed old woman like me (I only asked him yesterday).

There were a couple of opportunities for mere mortals to see Attack the Block in advance of it's release date (11th or 13th May, depending upon where you live and how tenacious you are) but if you can get to the Ritzy in Brixton the hot ticket is for a chance see it on the previous Friday and be delighted by a Q & A with Joseph Murray Sexy Cornish afterwards.

I've maintained that I'd keep this blog going if I had nothing better to do and I'm not saying I don't enjoy it but I am really busy at the moment so I'll leave it here and perhaps return with more nonsense in a couple of days. I haven't included the level of linkage I would have liked but let's see how the day pans out.

At the risk of sounding like a great big ponce, I'd like to renew my thanks to the team of delicious idiotholes who lend their support and words of wisdom via the portal of the internets. Your help and camaraderie make this so much more fun.