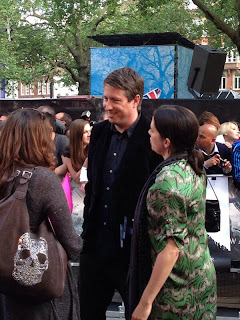 Once again, I'm retro-posting this in August but fooling everyone that I did it in June.

Total Film posted a lovely picture of Joe Cornish attending the World War Z premiere (as did Tanya). Adam was refused an invite due to the CK business*.

Theo Bosenquet has written a piece about Luke Treadaway (Brewis from Attack the Block) and the charity event he organised to help Autism charities. It was a really cool evening with some fantastic contributors.

Franz Drameh from Attack the Block was named as one of Screen International's 2013 UK Stars of Tomorrow.


Tim Butcher talked to Adam in a pod, like a pea.

Somebody :rolleyes: has put Adam's section of Celebrity Mastermind on YouTube.

Anthony Rubio has tatooed up his arm ATB-style!

Adam has finally put their Women's Hour radio play on his Soundcloud.


The PayPal Etail Awards invited Adam to present on the gong night.

Ben Steers took a sneaky picture of Adam at Here2013 as he composed a jingle "Wednesday Shag", before his very eyes.  It's Nice That have more pictures here.

You can check back on all the Buxty gigs you missed over at Hobbsy's fansite.