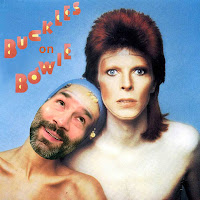 As I'm writing this in August (you'll have to read here to find out why) the Bowie Is exhibition has been and gone from these shores but Adam's 6Music Bowie Special aired in April and was a wonderful treat, soon followed by a BUG Special during the Bowie Weekend held at the V and A.  Those lucky few who marched up to demand free entrance were treated to over an hour of delicious waffle from Adam on his most beloved topic including two beautifully rendered video versions of the imagined conversations first aired on 6Music.

Intimate 6Music friend, Chris Assault with a Deadly Weapon Saltyman Salt made a Lego version of Bowie's re-inventing discussion with Angie and The Layzell Brothers visually realised the exchange between Bowie, Visconti and Eno. These videos will not be available online until the current format of Kernel Panic has ended as they're best viewed up big.

Sally Grosart has also made a Bowie Paper Person.

Adam's performances at the regular BUG shows are so thoroughly enjoyed but by their nature, require a structure based primarily upon showing the recent output of talented music director types from far and wide.  By building material for his own show, Adam can lark around like a ridiculous ponce, showing the things he really enjoys and inserting more of his own work, in the tireless manner that he brings to anything to which he contributes.  The result of this is Kernel Panic.

This new strand to his repertoire is being managed and marketed by the delicious people at The Invisible Dot and as an aside, I cannot recommend their venue(s) more highly. The tiny room in King's Cross is particularly good fun in the hot weather - if your idea of fun is being deprived of oxygen and melting into a pool of sweat.  It's all worth it though. This Spring and early Summer we have been spoiled by the chance to see warm-up performances from some of the UK's most celebrated comedians, including Adam's Work In Progress.

Adam has also joined Peter Serafinowicz to add his voice to Lego City Undercover, if you have a game machine. Did I mention that last month at all?

Adam popped up in a couple of episodes of It's Kevin. Look at the clip, why don't you?

Michael Towers made this 1" homage to the Fist In Chips waffle.

This rather lovely tweet popped up in April too.

It's always fun when someone takes a snap of Adam's desktop folder. 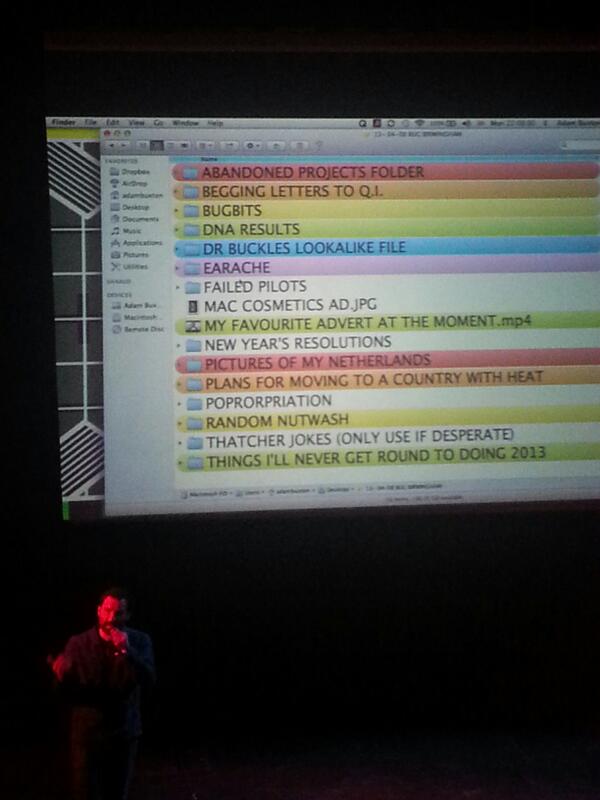 It's not quite all about Adam this month.

Luke Treadaway, who played Brewis in Attack the Block, deservedly won this year's Best Actor Olivier Award for his portrayal of Christopher in The Curious Incident of the Dog in the Night Time.

Elizabeth Donnelly reminisces about the last time Wright, Pegg and Frost hit the roads of Americas (with Joe too).

Edgar Wright held and introduced his Screen Epiphany at the BFI, a clip of which is here. His buddy and sometime writing partner, J M Cornish folded his long shanks into a chair at the NFT1 to watch too. 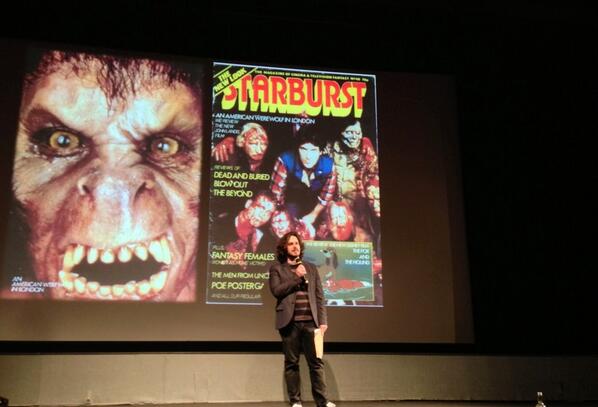 Speaking of Ant-Man (as I was, obliquely), you can read a Marvel-based update here.

Tyler Stout has made some wonderful limited edition posters for Attack the Block.