Posts on this blog are almost as rare as news of Joe Cornish but here's a stab at a couple of things that might tickle your attention sensors.

David Bowie's new album has caused such jiggidy in the love loins that any/every establishment wants to flaunt their joy and BBC 6Music is joining the fun, albeit deferring the saturation until Easter Week.  There are countless nuggets to enjoy from everyone in the best radio family ever saved by it's listeners.

Adam's show will air for two hours from 4pm on Easter Sunday and will include his favourite interviews. You can read more here.

Now, see here.....if something popped up that meant Zavid would allow Adam and Joe to pop over the pond to interview him, I would happily release Adam from any of his other commitments. If it meant I didn't see Adam talk to Edgar Wright in his Best of BUG Special at the enormous Odeon Leicester Square, I wouldn't mind.  Nothing should be allowed to stand in the way of them realising a dream like that.

Adam really does have a good schedule for the coming months. He's bouncing around the country like Psy on an ego trip.  Check the Adam and Joe fansite for the latest dates and you can even try Adam's own calendar um... feature.  None of these resources are exhaustive and if you have any gig info, I know the fansite forum would be grateful to know.....or you could sent me a little Tweet.

I used to keep a little blog with nuggets of sound and other short missives. That blog was run on Posterous which was bought out by Twitter and they will be pulling the plug on it at the end of April. This means that the hundreds of silly sound nuggets I've posted there will evaporate. Ruddy miserable doesn't quite cover it.

I've moved all the wordy bits of the posts here but it will take some time for me to put all the sound back. I've re-upped a large chunk of them but I have to go to each individual post to insert the new link for them all.

In other news:
Adam is looking even sexier and deceptively bookish in his new spectacles.
Joe is still breathing and poncing around with film types. 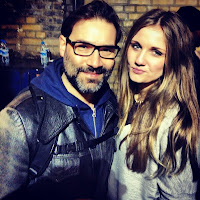 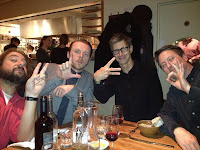