The Mud Is Settling On Worthy Farm 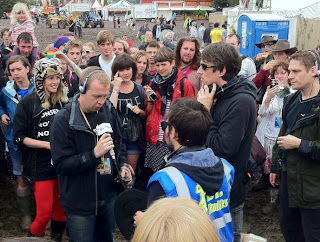 We were most certainly spoiled over this past weekend.
(picture credit to Matthew Edwards there, featuring Lucy, James, Adam, Joe and possibly Tom plus BlackSquadron dedicated Glasto Division)
Those of us confined to our dry and refrigerator-handy homes began three days with utter nonsense, nonsense, nonsense from our Commanders and those poor souls who chose to endure sleepless days and nights from noisy neighbours were rewarded beyond their wildest dreams with what I'm going to puff up by referring to as TWO personal appearances from the webcam-shy radio botherers.

These being the last few shows for the predictable future, they went out with a sonic bang, if you will.

Invited to join the start of the Saturday show, the response from onsite Black Squadron members warmed Joe's cockles so much his jeans began to give way and even the most stubbornly prickly whisker on Adam's magnificent beard was softened to a downy wisp.

Don't take my word for it. Catch up on all the waffle over at the BBC site.
Glastonbury is surely one of the prime reasons it was imperative to save 6Music. The coverage could not have been sustained by any of their other so-called 'stations' to the level of excellence we were privileged to enjoy. We had tireless work from James, Lucy and Tom plus missive wrangling and fielding from Peta on the web feed. Thank you BBC. Thank you 6Music.
That said, the website is not as handy to navigate as the regular show based thingumies so if you want to Listen Again (and you really should) the links are:

There are still podcasts to catch-up on and revisit. The BBC have some special dispensation to leave a ton of them there going back as far as last Christmas.

Many happy souls excitedly tweeted pictures from their encounters with our generous leaders and whilst I enjoyed them all, I have selected these two to share as they produced the most enduring rictus. There are many more in the Adam and Joe section of the BBC Glasto web portion. 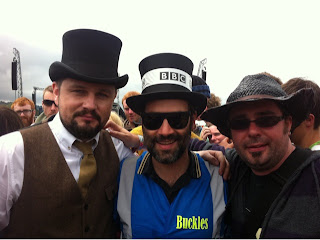 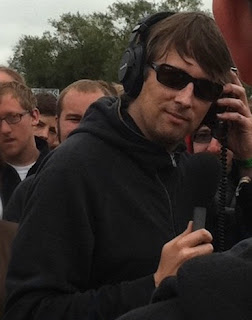 From @Pintendo64, a beloved member of TwitSquadron who gets a killer look from Dr Sexy at what was, no doubt, a salacious comment from her.


To my great joy and surprise, they whispered a little word of thanks in my lug area via the final podcast.
Some of my web-based operation would not necessarily comply with BBC Guidelines and for that reason I have assumed they'd not mention me within the castle walls. Perhaps they felt that this little field trip afforded them a cheeky opportunity for which I am deeply touched.
Adam overcame fears of tearfulness to use his heartwarmingly and sincerely genuine voice. Joe played it safe, using the stoic tones he reserves to hide what is clearly a deep rooted passion.