I used to do a blogpage each month but my life is too rich and full to spend that kind of time on nonsense so I am celebrating the start of the year by trawling through twelve months of tweets and faves. There's not a lot of waffle from me but a trip down tweetory lane does provide a decent potted history without too much strain on this brain.

It got quite lumpy so I have split the year in half. The first half is here.

This has skills and they are brills.

@AdamBuxton My inability to remove the Ramble Chat jingle from my bonce has led me to celebrate it in image form! pic.twitter.com/4h9ox3YPQQ
— Mister Phil (@mrpillustration) July 1, 2016


July started with one of the silliest events of the year.

By all accounts, Adam's interview with Louis Theroux at Latitude was the hottest ticket of the day, and when I say hottest..... 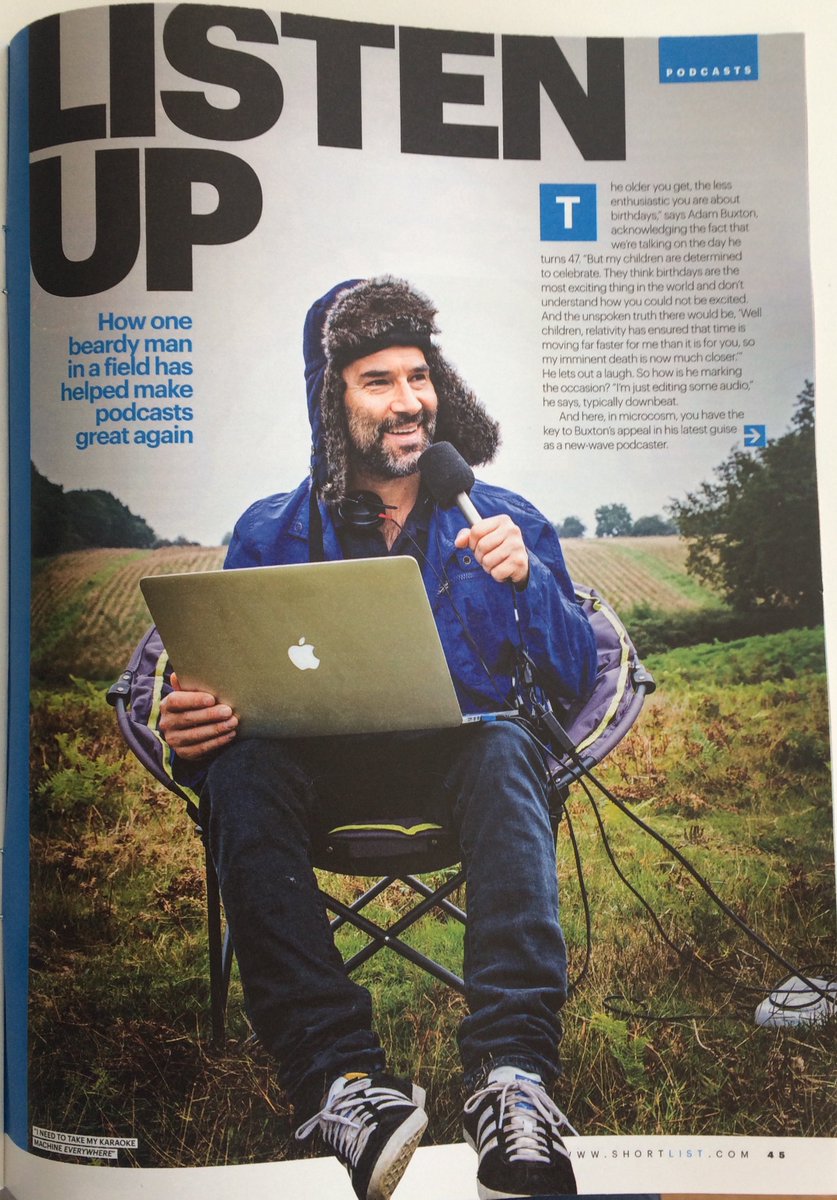 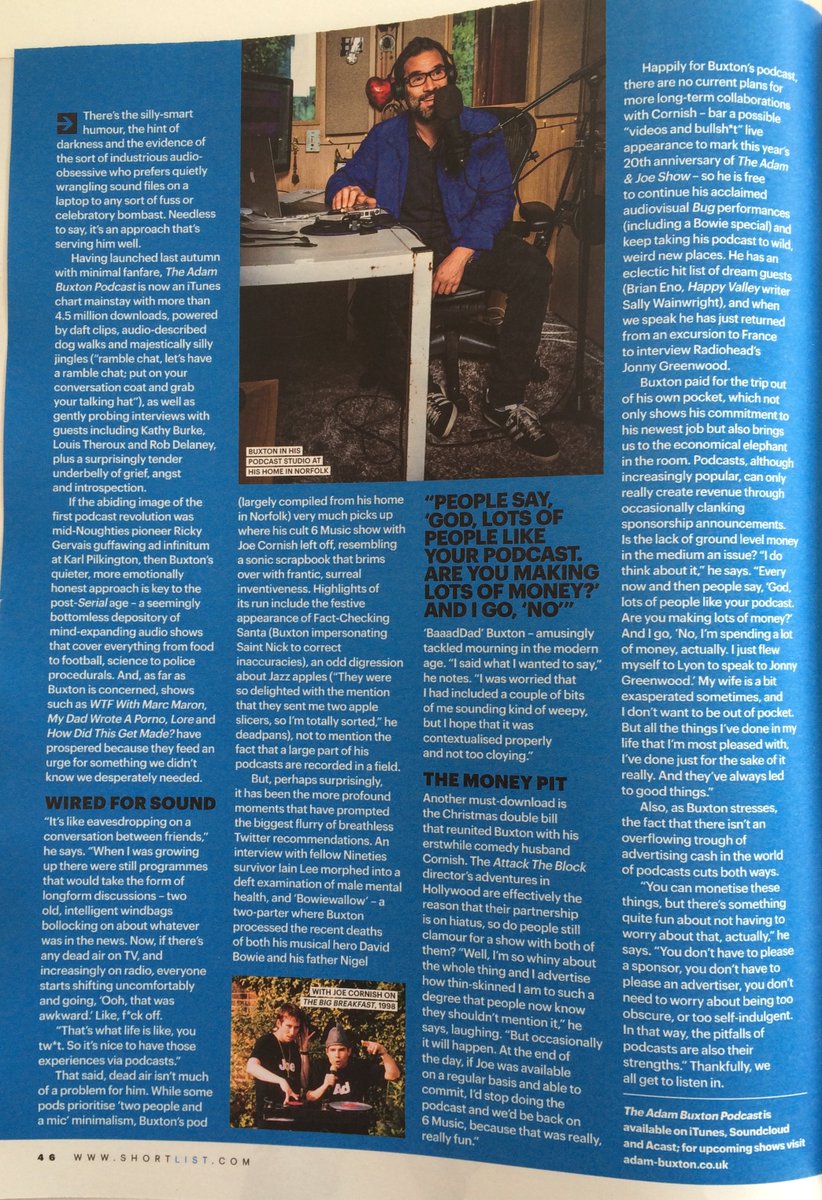 This month's pods were two with Richard Ayoade and one with Sally Wainwright. If you'd like to watch Sally's Bronte drama, it'll be on the iPlayer for a bit, as will the two part Last Tango in Halifax shown over Christmas.

Adam did his Bowie show in Dublin this month and we got the first whiff of a potential live reunion.

@AdamBuxton delighted to meet his man and he was a true gent. Plus his Bowie show was a smash pic.twitter.com/Jp6m24c1dV
— Bound (@seamusfeeney) July 28, 2016

August gave us our first joyful nugget from Sketchy Magpie!

@AuntieNubbins hello! The latest episode of my film show is about Attack the Block. I thought you might enjoy! https://t.co/KLIxuj7I2k
— Richie Morgan (@Laslo_Panaflex) August 13, 2016

This month's pods were with Bill Hader and that's all you need in one month.

One of my personal favourite sound nuggets realised in drawn animation by Sketchy Magpie.

@AdamBuxton Really far away...I found this planet. Look at that, you could pile so much pudding on the top of it. pic.twitter.com/78wZ7f8JOM
— Stephen Wilkins (@MrWilkstead) August 11, 2016

This month kicked off with a glorious podcast with Michael Palin, then another one with Louis Theroux and finally Michaela Coel.

....and this mysterious piece.

Scroobious Pip's book features quotes from his pod with Adam.

The Times selects its podcast of choice.

@AdamBuxton pleased to see that you are the Podcast choice in 'The Times', yesterday. As it should be every week. pic.twitter.com/GkWuq7UOwH
— Miles Orru (@milesorru) October 2, 2016

This month, the possibility of an Adam and Joe live show became more of a reality, and not without its problems. The event was finally announced by the BFI on 25th October - with a performance date of 15th December and Adam was letting everyone get involved.


He interviewed Louis live on stage again, this time at the Royal Festival Hall as part of a special My Scientology Movie screening. YOu can watch the interview here.

The podcasts this month were from Rory O'Neill and Tash Demetriou.

Adam only released one podcast this month (with Matt Berry), but what a pod! He also recorded a pod about grief.

ICYMI: @ladycariad has launched a new podcast talking to comedians about death. @AdamBuxton is in a poignant 1st ep: https://t.co/C0HNadEupD
— The Velvet Onion (@thevelvetonion) November 21, 2016

Now might be a good time to remind everyone that there is an archive of the videos show at each BUG show here. Here's a blog about BUG53 and Lazarus.

Forgot that I took a photo of Cornballs before the @bfi Attack The Block screening to try to show how ginormous the IMAX screen was. pic.twitter.com/FRP0nAdGKB
— Nicola Richards (@NickyRR) December 18, 2016

The year is almost over and for those of us who didn't keel over, the 15th was Adam and Joe Day.


I hope Luke doesn't mind me linking this image. You can buy the poster here. More merch is here.

Adam has gathered together many of the fan-made videos from the live shows for you to enjoy here.

loved Adam and Joe at the BFI tonight - they should take the show on the road pic.twitter.com/SC1ofeTaK0
— hobbsy (@hobbsy) December 15, 2016

Adam & Joe Live tonight at the @BFI was a total treat. A celebration of 20 years (& more) of the funniest sharpest fellows around. Love em. pic.twitter.com/hJpcuFV46M
— edgarwright (@edgarwright) December 16, 2016

There are loads of Getty pictures taken by Eamonn M. McCormack and here's a little blog about the night.

Not used to tagging Telegraph articles but it IS Christmas https://t.co/b86ZzNoGrA
— Raving Ponce Machine (@AuntieNubbins) December 25, 2016


I feel as though I want to write a lot more about the Adam and Joe Live evening but the memory is safe in my branium for the time being.

You can catch a flavour of the evening (or relive it, if you were able to attend) in Adam's last podcast of the year, with Cornballs.

MY JAMES BOND JOKE IS ON THE ADAM AND JOE XMAS PODCAST!