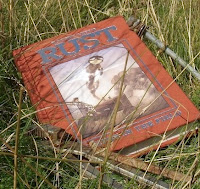 I was never proud of the gaps between blogposts but it's been two months since my last one and I won't remedy that anytime soon.........It's not as though there isn't any news.

Adam Buxton's BUG has been going for six of it's planned eight weeks and the only complaint he gets is about the shortness of each episode.

Along with Snow Crash, Joe's name has also been attached to Rust. Only time will tell us what stage either of these projects might have reached.

Adam continues to be as optimistic as he can about a return to 6Music, with or without Joe and keeps the events section of his blog up-to-date with gigs but you might sometimes find additional Adam and Joe news here.

I do tweet as much news as comes my way and Adam has made a couple of blogposts recently. He also puts the latest BUG song video on his channel seven days after Sky airs it.

You can always check the forum and blog at AdamAndJoe.com.

For the more nerdy, detailed news, I'm afraid I'll get to it when I can. It won't actually be news by then but more of a memorandum.

I'd apologise but that smacks of self-aggrandisement.