Attack the Block was finally released in Italy at the end of May. Joe popped over to Rome for some promotion and a masterclass held by the artistic director of the filmschool in Cinecitta. There are tons of interviews with a variety of dubbing and subtitling going on.

Here's most of the masterclass:


Finally, a tiny mention of Ant-Man:


Do you recall the special jury mention that Attack the Block got at the Future Film Festival? How wude! Joe was presented with the certificate while he was in Rome.

Sky Atlantic held a showcase event for their New Comedy Season. Adam in awe of the great company and the episode shown was very well received, if the tweets are any indication. A multi-programme trailer went on air later and Twitter went potty.

Details of the brand new air date are here.

BUG Music Videos have released a phone app for both Android and iPhone, You can have Buckles on-the-run! Enjoy new videos or just look at beards while you're waiting at the supermarket check-out.

If you're feeling creative, this year's video challenge gauntlet has been thrown down.

Adam gave a Best of BUG show in aide of Marie Curie earlier in the week. From his comments at BUG31 last night, it seems he had some technical problems again. I hope he realises how much his audience enjoy these. It's just not the same when everything runs smoothly.

Tickets for BUG 31: The Director's Cut are showing as sold out but there will be a few returned nearer the time. If you can't make it or don't mind spoilers, Mat Dolphin runs through last night's show here.

I'll not forget Adam deploying his offensively reductive French accent in the face of Mnsr Yoann Lemoine in a long time, nor the ridiculous attempt at an English accent hurled back at him. Anyone who has attended a live BUG show will be familiar with Dr Buck's Suitcase and I found this shot from his latest desktop. 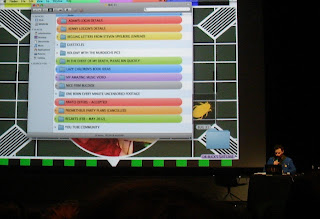 BUG have also added The Cambridge Comedy Festival and a gig at King's Place to their list. Due to high demand, Norwich BUG #10 will run for a second night. You can check for this kind of thing here.

Attack the Block will be released in Japan very soon. They keep adding bits to their website but they don't have the might of Filmauro behind them for marketing.

Tommy Mackay made this video to go with a much-loved Adam & Joe Radio Show nugget.

Attack the Block's Paige Meade will be at the Hackney Weekender.

Do you know what I did for £10 the other week? I saw Mr & Mrs Herring practise their Edinburgh Shows on me. If you're going up there, you should book. They're bound to have got them sorted by then. Seriously, the shows were so good, I felt I had give Scope all the money I had left in my purse.

The other day, Richard did a podcast show with Attack the Block's Nick Frost.

Radcliffe & Maconie's regular feature 'The Chain' had it's 3000th entry this week with 'Bonkers'.

Finally, somebody made a paper version of the Prometheus trailer.