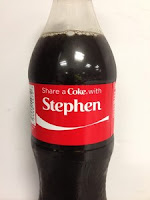 If you're not being paid to blog, you'd be completely nutzoid to spend time bent over one when there's proper summer-style weather to enjoy. I'll grant you that it's a bit overcast today but this has been my stance on the virtual lack of blogg-edness.

In my defense, I did stir myself for a couple of hastily barked missives on my nugget blog but it's a far cry from a regular catch-up about Adam and Joe.

All this preamble is an apology for the stodgy pudding which must surely follow as I catch up from March. Eat until you're full and leave the rest in a tidy lump at the side.

In the interests of transparency, I might as well say most of this will be about Adam because Joe is.......he just is (but only just). I did hear some reports that he was making a model of Le Centre Pompidou out of les stick du lolly but they're thus far unfounded.

As well as continuing his Best of BUG touring & regular dates at the BFI and Norwich Playhouse, Adam has been expanding his reach by developing his own stand-up show, wearing even more body hair than nature gave him in support of Kevin Eldon's tv show and also interviewing terrifying actors.

Since my last proper update, Adam has added the full episodes of his BUG TV show to his YouTube Channel. Several people have helpfully made playlists for all eight eps. Here is Dominic's link. For reasons beyond his control, some episodes are too copyright-laden to be viewed on anything sexier than a laptop. You'll just have to make some time when you get home.

Joe has kept out of the public eye but has been spotted on a couple of red-carpets and made two public appearances just last week. Imagine!

It has now occurred to me to invoke the full might of simple internet technology and divide this huge catch-up into more manageable nuggets by pretending that I posted them at monthly intervals. I know I'll not fool any regulars but just think how much it'll impress a newbie.

So if you're really interested, scroll down to the April update and read forward from there.

Other things that happened this summer was that many, many people sent Adam tweetpics of a Coca Cola bottle with "Stephen" on it and twice that number told him, and continue to tell him that Taffin is on Netflix. What a joyous season it has been.